The US Federal Reserve decided unanimously on Wednesday to increase interest rates by 50 basis points, to 0.75%-1.00%, as was largely expected. This was the second straight increase after the March lift-off and constituted the biggest hike since 2000 and the dot-com bubble.

The accompanying policy statement pointed to more adjustments ahead, as the Committee "anticipates that ongoing increases in the target range will be appropriate". [1]

The central bank had concluded its asset purchases program in March - which has inflated its balance sheet to nearly $9 trillion - and yesterday it announced a plan to reduce it.

The Federal Reserve had long viewed high inflation as transitory, focusing more on restoring the labor market, but was forced to change tack and embarked on an aggressive monetary tightening path in order to bring inflation down. On Wednesday, it reiterated its focus on this task, noting "The Committee is highly attentive to inflation risks", while recognizing that "Inflation remains elevated".

Chair Powell opened his press conference – the first in-person one since the pandemic – by addressing the American people directly and said that "Inflation is much too high", before adding that "We have both the tools we need and the resolve it". [3]

Mr Powell was forceful in his inflation messaging and the pledge to bring it down and restore price stability, but his comments around the bank's future moves were rather conservative.

During his press conference, he talked of "a broad sense on the Committee" that half-percentage point increases "would be on the table at the next two meetings", pouring cold water to the expectations of proponents of more aggressive hikes.

When asked around the size of upcoming adjustments, the Chairman said that 75 basis points increases is "not something the Committee is actively considering", which sent the US Dollar lower and US equities higher.

Last week's preliminary data revealed that the US economy contracted in the first quarter of the year, as advance annualized Q1 GPD was -1.4%, from 6.9% final reading for Q4 2021.

Yesterday the bank acknowledged that the economic activity "edged down in the first quarter", citing "highly uncertain" implications from the war in Ukraine, which are "likely to weigh" on the economy.

The latest employment report is due on Friday, but the last data showed that Unemployment dropped to 3.6% in March, 431,000 new jobs were added and the participation rate ticked up to 62.4%.

Recent data have been supportive of the Fed's tightening, which said yesterday that "job gains have been robust in recent months, and the unemployment rate has declined substantially", while Chair Powell reiterated that the labor market is "extremely tight".

The big question now is whether the Fed can bring down inflation without plunging the economy into a recession and causing another surge in unemployment. This is definitely not an easy task and Mr Powell's reference of achieving a "soft or softish landing" did not inspire much confidence.

The Federal Reserve has done a good job in communicating its actions well in advance, having prepared markets for the 50 basis point interest rate increase and the balance sheet runoff.

As such, US stock markets were relived from the lack of any hawkish surprise and the fact that Mr Powell pretty much ruled out bigger hikes sent them higher and the US Dollar lower.

Despite some dovishness in the bank's rhetoric, the reality remains that it is on an aggressive and front-loaded monetary tightening path, and far ahead than most of it major counterparts, despite recent hawkish shift form some of them, such as the Reserve Bank of Australia. 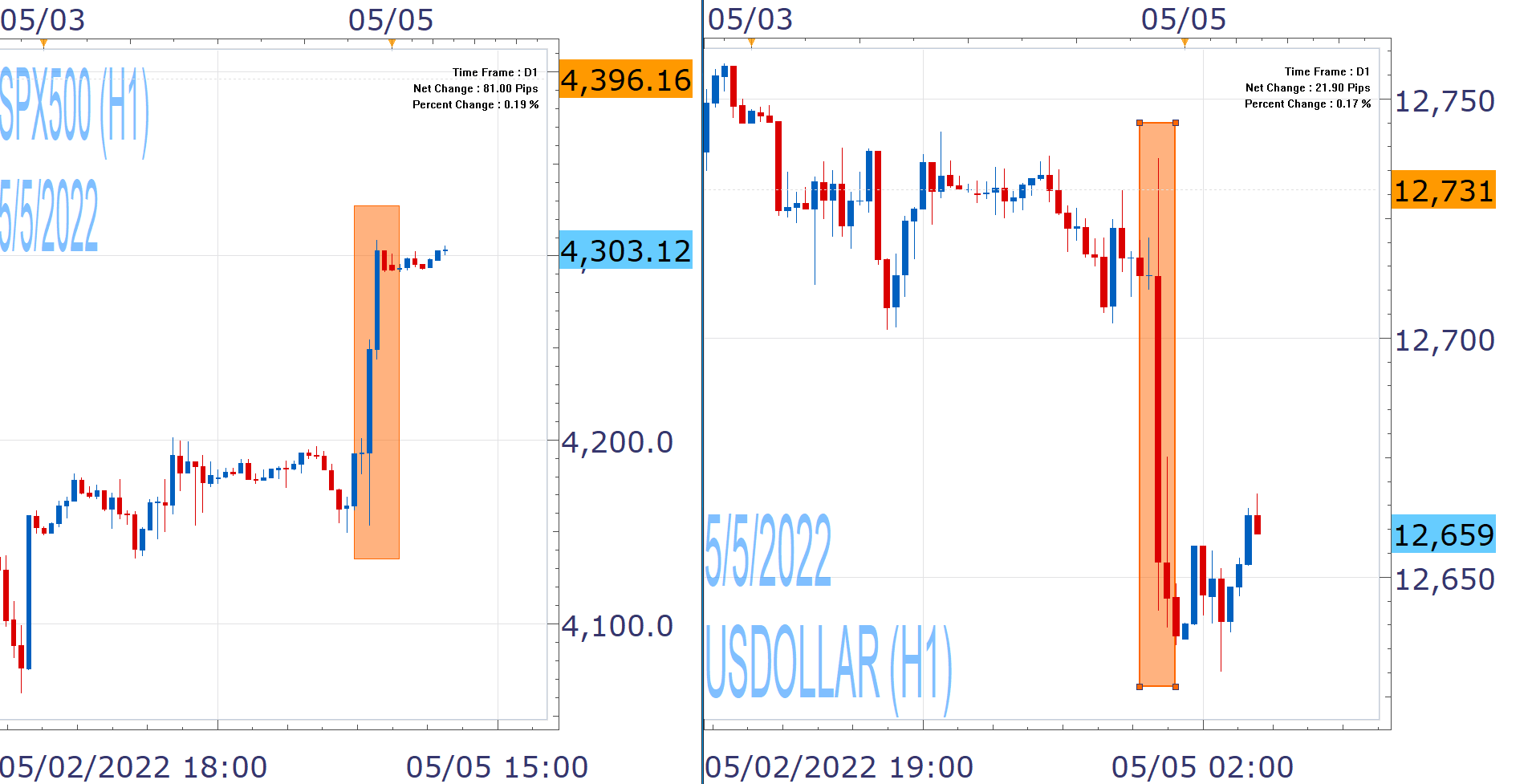