The saga of Twitter's acquisition by Mr Musk drags on despite the fact that the two sides had reached an agreement for a $54.20/share buyout back in April. Late last week, Tesla's CEO, had put the deal "temporarily on hold" until he could verify Twitter's estimate that fake/spam accounts represent less than 5% of its user base. [1]

The current week started with another strike by Mr Musk, who said that the deal "cannot move forward", until he can get confirmation of the aforementioned claim around fake accounts. [2]

A day earlier, the CEO of the microblogging platform Parag Agrawal had posted a series of tweets on the issue, noting that the figure is an internal estimation which cannot be performed externally, "given the critical need to use both public and private information". [3]

Meanwhile, the firm's Board of Directors recommended to the shareholders to vote in favor of the acquisitions deal, with the Annual Meeting of Stockholders taking place on May 25. [4]

TWTR.us had surged up to 54.63 after the news that Musk had acquired an around 9% share in the company in early-April, but the erratic tweets and the latest spat over the fake accounts have sent it well below $40 and the acquisition price.

There has been a lot of speculation around Mr Musk's motives for putting the deal on hold, from trying to negotiate a new price, to having regretted his decision and to worrying of the impact on Tesla's stock. TSLA.us had lost more than 30% as of yesterday's close, since the start of April. 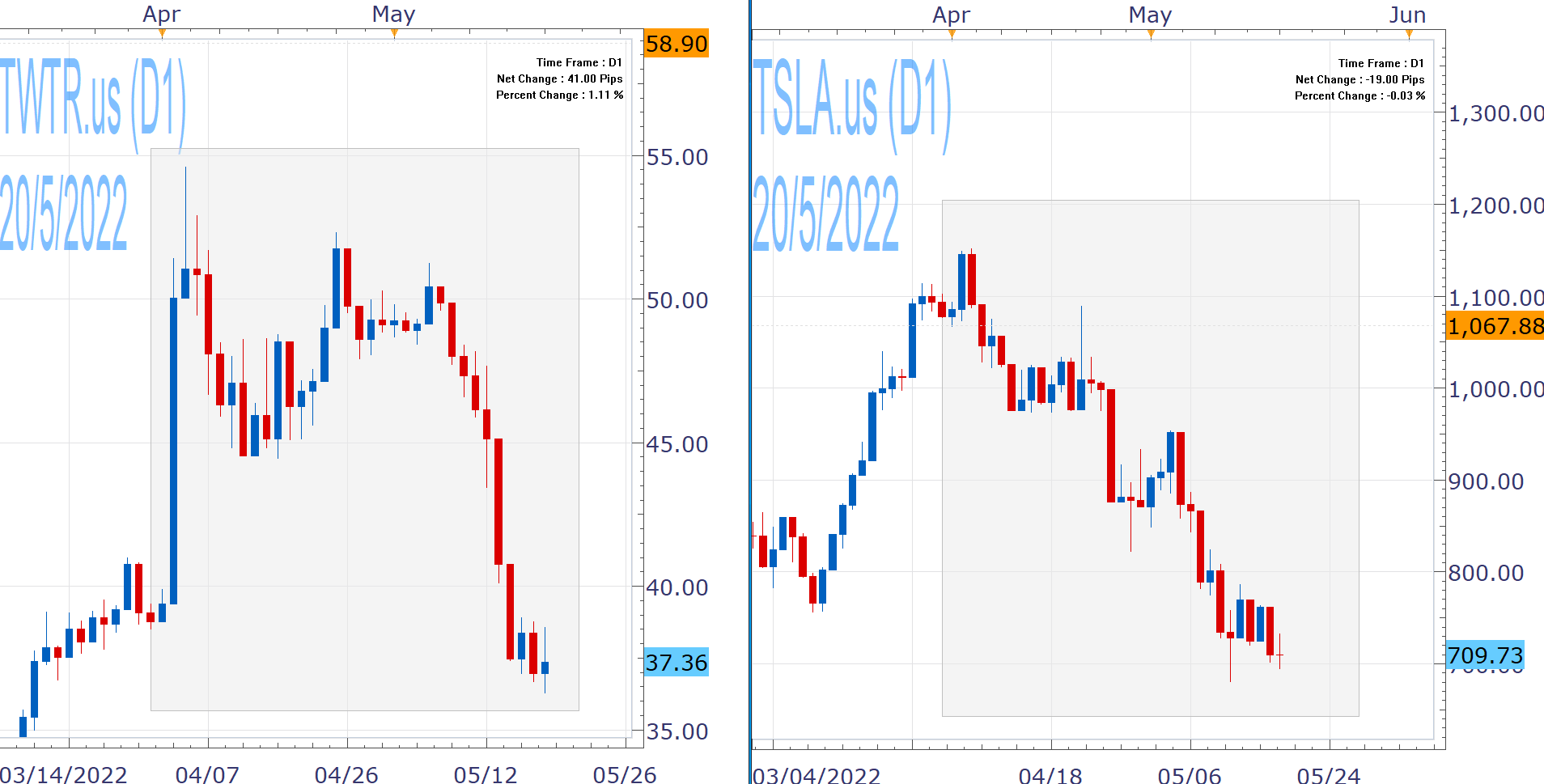 Major US retailers reported their quarterly results, with Target (TGT.us) and Wal-Mart both taking a big hit to their bottom lines, which sent their stocks and Wall Street lower.

SPX500 had its worst day since the height of the pandemic after those results and is on the brink of a bear market, losing close to 20% from its record highs at the ime of writing, as the earnings report reignited fears of stagflation.

Target's top line was not that bad, but its Net Earnings halved to around $1 billion in the first fiscal quarter, compared to a year ago, while its Operating Margin was squeezed to 5.3%. [5]

Chairman and CEO of Target, Brian Cornell, attributed the low profitability "unexpectedly high costs" and the firm downgraded its forward guidance for the full year, now seeing operating margin at 6%, from 8% previously.

The UK-based telecommunications giant reported solid financial results for the full fiscal year of 2022. Group Revenue increased 4% year-over-year, to €45.58 billion, while registering a similar growth to its Adjusted Earnings (EBITDAaL), which came in at €15.52 billion. [6]

The Group made a Profit of €2.6 billion in the reported year, a big jump from €0.5 billion prior, primarily driven by higher Adjusted EBITDAaL, and lower income tax expense.

Despite the strong report, Vodafone Group PLC offered forward guidance that was rather conservative, projecting Adsusted Earnings of €15.0 – €15.5 billion in FY23, noting that inflation will likely impact the financial performance in the year ahead.

Last week, the Emirates Telecommunications Group Company PJSC ("e&") had announced the acquisition an approximately 9.8% stake in Vodafone, making it the largest shareholder.

Things were not any better on the bottom-line, since Gross Profit plunged more than 10% compared to both the previous and year-ago quarters, to approximately RMB 12.709 billion, while the company slipped at an Operating Loss in excess of RMB 910 billion.

The firm cited headwinds from the persistent supply shortages and the Covid-19 resurgence, but noted that despite these issues, it continued to advance its business strategies.

On the smartphone business, which is its main revenue generator, Xiaomi maintained the third place globally during the first quarter as per Canalys' research [8], having captured around 13% of the market. However, it slipped to the fifth place in mainland China, from the fourth in Q4, with 14% market share and 10.6 million shipments. [9]

Despite the bad results, XIAO.hk posted gains of around 6% on Friday, completing a profitable week and recovering from the two-year lows (10.22) set during the previous one.

The ride-hailing company released a platform an update with many new features, in push to become a travel super-app, as the summer holiday season is right around the door. [10]

The new features include the ability to reserve rides for every leg of a travel itinerary via Gmail connection, to book party buses and coach buses within the app, voice ordering on Eats, even food delivery into select stadiums.

Furthermore, Uber extends its EV offering, allowing users to request rides on premiums electric vehicles such as Teslas and has built an EV Hub and a charging map in the platform for its drivers.

Earlier in the month, the San Francisco based company had reported a 136% Revenue growth year-over-year in the first quarter, but had slipped into a $5.9 billion Net Loss. [11]

The earnings activity has dwindled in the United States, but there are still some high-profile US corporations and dually listed Chinese firms, reporting during the upcoming week.

Graphics cards maker Nvidia, Chinese tech and retail giant Alibaba and Chinese electric vehicle (EV) maker XPeng, are some of the ones that stand out.