The vacation rental firm had a solid first quarter, with a 70% Revenue growth year–over-year, to 1.5 billion and solid Earnings (Adjusted EBITDA) of $229 million, albeit lower than the 333 million of the fourth quarter.

Airbnb reported significant growth with the 102.1 million Nights and Experiences Booked and the $17.2 billion in Gross booking, both higher more than 50% year-over- year. However, it returned to Net Loss of $19 million, after having posted Profit of $55 in the prior quarter.

Those figures are encouraging and show that the company is well positioned to take advantage for the post-Covid recovery in the tourism industry and Airbnb offered strong forward guidance, for the important second quarter of the year, projecting Revenues of $2.03 - $2.13 billion.

The US company noted that guests stay longer, even living on Airbnb, a concept that it has been trying to push for a while now. Long-term stays are at an all-time high, more than doubling in size from Q1 2019.

ABNB.us rallied on Wednesday after the results, but heads towards its third consecutive losing week.

The European plane maker reported strong results for the first quarter of the year, with a 15% Revenue growth year-over-year, to €12 billion, although the figure was significantly lower compared to the €16.994 billion of Q4 2021. It also saw a huge surge in Net Income compared to a year ago, which came in at €1.219, but it too fell short of the €1.578 billion reported in the previous quarter. [2]

Airbus delivered 142 commercial aircrafts in Q1, reaffirmed its production target of 65 A320s/month by summer 2023 and announced a new increase to 75 A320s/month in 2025 in order to meet customer demand. The firm noted that the production bump will "benefit the entire global industrial value chain" and will lead to a bigger industrial footprint in the US.

The aerospace giant maintained its forward guidance for the delivery of 720 commercial airplanes in 2022, but pushed back the launch of the A321XLR to early 2024, from previously planned entry into service within 2023.

Rival Boeing had disappointed with it quarterly results in late April and the delivery of 95 commercial airplanes. [3]

Earlier in the week Australia's airliner, Qantas Airways Ltd, had confirmed an order for 12 x Airbus A350s, in order to materialize the Project Sunrise. This is the firm's plan to establish direct flights from Australia to New York and London from late 2025. [4]

The firm's Revenue surged 136% year over year in Q1 2022, to $6.9 billion, with the "traditional" Mobility segment surpassing the Delivery one, as the world moves away from the pandemic lockdowns. The Delivery business however stayed ahead in terms of Gross Bookings, with the total figure coming in at $26.4 billion. [5]

Despite these solid results, the firm slipped into a big $5.9 billion Net Loss, compared to a profit of $892 million in Q4 2021, hurt the stake in Grab, Aurora, and Didi.

Earlier in the year, Uber had reached a deal to have New York City's yellow cabs on its app, marking a significant turning point for company and the industry as a whole, given the opposition it has faced from traditional taxi services. [6]

A day before, ride-hailing competitor Lyft had reported Revenue of $875.6 million in the first quarter, which marked a strong 44% year-over-year rise, but was lower than the $969.9 million generated in Q4 2021. [7]

UBER.us dropped after the results and loses more than 10% on the week, having set two-year lows. LYFT.us plunged on the first trading day after the earnings report, also setting two-year lows. 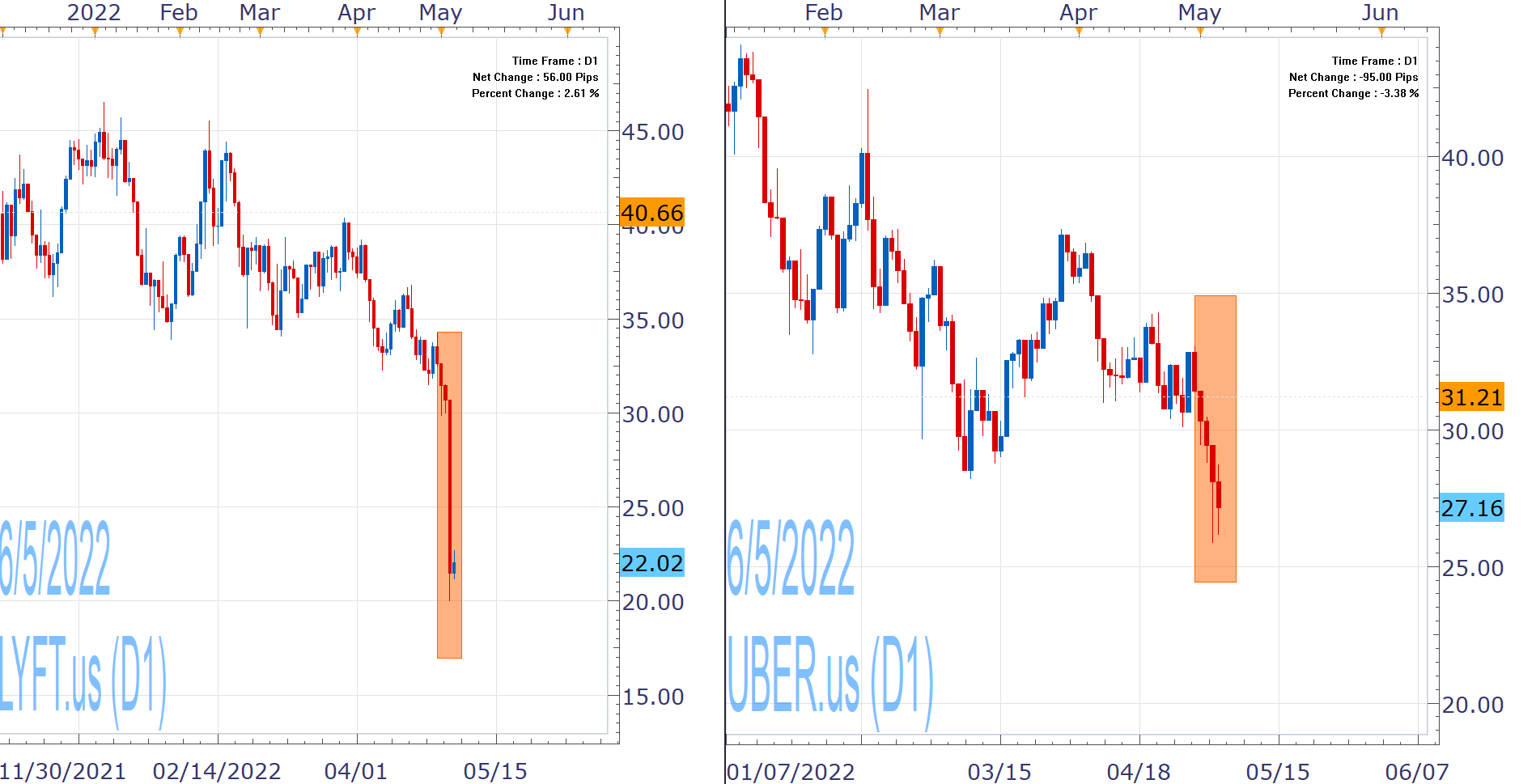 The BMW Group announced significant increase in electrified vehicles for the reported period, while the BMW iX3 was the fully electric vehicle with the highest deliveries (11,200). Total Automotive Deliveries amounted to 596,907 unites, a 6.2% decline year-over-year.

Rival Volkswagen AG saw a marginal increase in Q1 Group Revenues compared to a year ago, having generated €62.7 billion, while Earnings (before tax) nearly doubled to €8.895 billion. [9]
Total Deliveries declined to 1.898 million vehicles, from 2.432 million a year ago, due the "Covid-19 pandemic and parts supply shortages". However, deliveries of all-electric vehicles (BEVs) rose to 53,400 units. [10]

US SEC Adds More Chinese Firms to its "Naughty List"

The US Securities and Exchange Commission (SEC) added close to 90 entities, to a list of companies that face risk of delisting from the US stock markets. [11]

What is often referred to as the "Naughty List", is based on the 2020 Holding Foreign Companies Accountable Act ("HFCAA"), which aims to remove foreign companies from US stock markets if they fail to comply with US auditing procedures for three consecutive years.

The updated provisional list, now includes high-profile Chinese firms, such retail giant JD.com and EV makers Nio and XPeng. The newly added companies, have until May 25 to submit evidence disputing this designation.

Nio Inc recently started trading in the Hong Kong stock market, while yesterday it announced the proposed secondary listing on the Main Board of the Singapore Exchange Securities Trading Limited [12]. At the beginning of the month, the EV maker said that it had delivered 5,074 vehicles in April, a significant slowdown from the 9,985 units delivered in March. [13]

Rival Xpeng Auto, which is expected to release its Q1 financial results on May 23, also experienced a steep decline in deliveries, as it handed over 9,002 cars in April, from 15,414 in the prior month.

NIO.us and XPEV.us both shed more than 10% after the news of their inclusion into the SEC list, with the latter ending a six-day profitable streak. 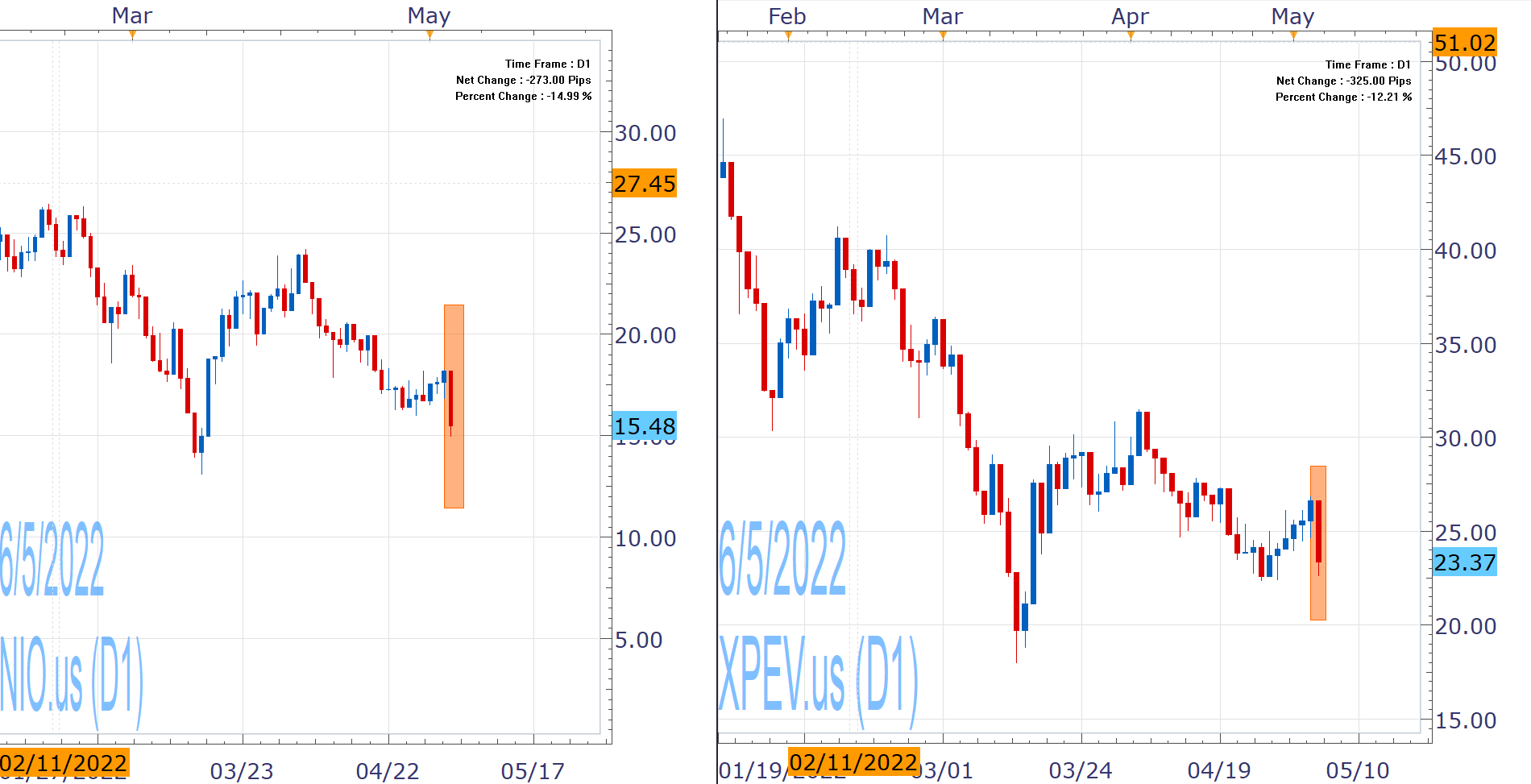 The earnings season continues, with Disney being perhaps the biggest name this week, as it reports its Q2 FY22 results on Wednesday. Its streaming service, Disney+, will be in the spotlight, following rival Netflix's shocking loss of 200K subscribers during the first quarter.

Electric vehicle (EV) maker Rivian Automotive is another firm that stands out during, announcing its results on the same day as Disney. Rivian has beaten rivals to EV truck market with the impressive R1T, but its prediction for 25,000 vehicles in 2022 was rather underwhelming. [15]

Other than that, we also expect some high-profile German corporations, such as Bayer, Deutsche Telekom and others.