The Reserve Bank of New Zealand (RBNZ) delivered its second 25 basis points (bps) rate increase in a row, bringing the official cash rate (OCR) to 0.75% - in line with baseline forecasts. [1]

The Monetary Policy Committee noted that "it remains appropriate to continue reducing monetary stimulus so as to maintain price stability and support maximum sustainable employment".

On the inflation front, official's acknowledged that "Headline CPI inflation is expected to measure above 5 percent in the near term before returning towards the 2 percent midpoint over the next two years".

The records of today's meeting showed upbeat view on the economy, with officials noting that "…the economy is expected to recover as public health restrictions are eased…".

Today's Monetary Policy Statement contained upgraded projections for the level of interest rates [2]. In particular, the bank now sees OCR at 2.1% by the end of next year (compared to 1.6% in the August statement [3]) and at 2.6% on December 2023.

This would imply five rate increases of 25bps within 2022, from current 0.75%, which is a rather aggressive path. The bank generally holds seven OCR decisions, so there is room for bigger moves than 0.25%.

Annual CPI Inflation is forecasted to subside to 3.3% in December 2022, but this is significantly higher compared to the August projection of 2.2%

In its previous meeting in October, RBNZ had raised rates for the first time since July 2014, while this summer it had concluded its Large Scale Asset Purchase Program (LSPAP). These actions have placed it at the forefront of policy normalization, as its Australian counterpart (RBA) still runs an asset purchases program and the US Federal Reserve announced a reduction in the pace of Quantitative Easing (QE) just this month.

The main driver for these tightening efforts, is high Inflation which has surged to 4.9% y/y on the third quarter, while the drop in Unemployment to 3.4% in Q3 earlier this month, helped the RBNZ in delivering today's a back-to-back rate hike.

The Kiwi reacted lower on the decision, as it was largely priced in and probably disappointed those with more hawkish expectations of a bigger 0.5% increase.

As such NZD/USD sheds around 0.5% and registers fresh November lows, dropping bellow that ascending trend-line that has supported it since August.

From here it is exposed to September's lows (0.6858), although the multi-year ones form October appear remote at this stage.

Despite the negative reaction, the monetary policy differential can still support the pair, which holds 0.6900 for now, while the Relative Strength Index (RSI) points to overbought conditions. As such, we can see a return above the aforementioned trend-line (0.6930), although recovery above 0.6978 that will bring the familiar 200Day and 200H4 EMAs in the spotlight, will need a catalyst. 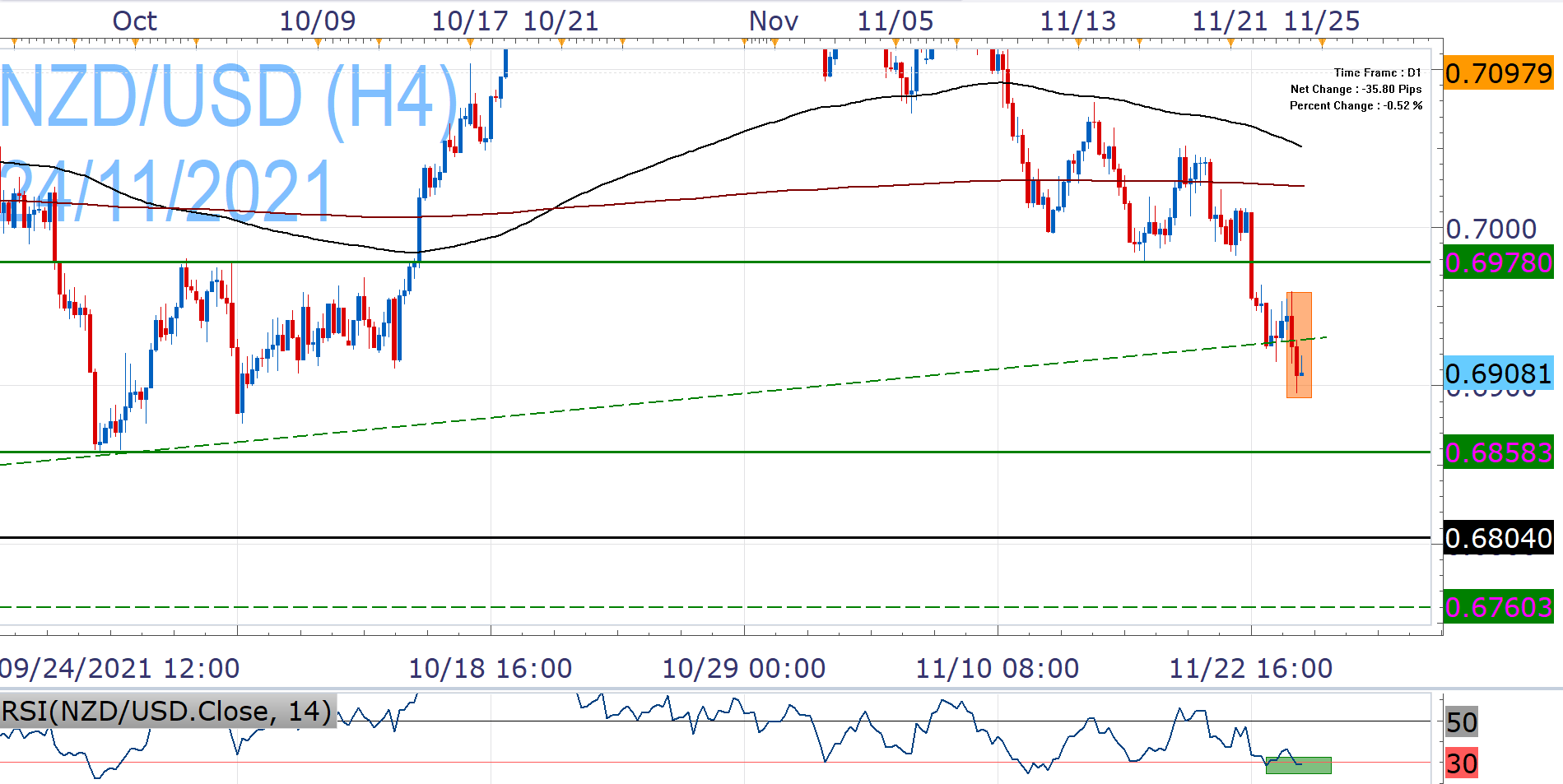 Caution is needed today, as the economic calendar is absolutely packed, mostly with releases form the US, ahead of Thursday's Thanksgiving Holiday. PCE Inflation, Q3 GDP and Fed minutes stand out today, all with the potential to increase volatility and affect the pair's trajectory.