Yesterday's Consumer Price Index (CPI) data sparked volatility, having shown that inflation eased in April to +8.3% year-over-year for the Headline CPI and to +6.2% for the Core reading, which excludes food and energy prices.

This marked a moderation from the corresponding 8.5% and 6.5% prints for March, which were the highest in four decades, but these are still red hot figures and also came in above expectations for 8.1% and 6.0% respectively.

The Fed has embarked on an aggressive monetary tightening path to bring inflation down, which is "much too high" according to Chairman Powell [1]. However, the US economy contracted by 1.4% in the first quarter according to late-April's preliminary data and the labor market is tight.

Perhaps with this in mind, Mr Powell pointed to more half-percentage rate increases at the next two meetings, but essentially ruled-out bigger 75 basis points moves, noting that this is "not something the Committee is actively considering".

Fed of St Louis President mr Bullard, who is a voter and possibly the most hawkish member of the central bank, agreed with this path in a Yahoo Finance Interview after the CPI release. He said that 0.5% moves "is a good benchmark for now" and that 75 basis points is "not my base case". [2]

The European Central Bank (ECB) is far behind its major counterparts and now the only major central bank that has not hiked interest rates, since even the RBA moved for the first time in more than 10 years last week.

The ECB however has been getting more hawkish both actually and verbally, as it has brought forward the conclusion of its asset purchase program (APP) into the third quarter of this year and we have seen some official advocating for rate increases as early as July.

Yesterday Ms Lagarde cemented the more aggressive tightening prospects, expressing her expectation that the APP "should be concluded early in the third quarter". Rate hikes are expected to begin "some time" after the APP conclusion and the ECB President noted that "this could mean a period of only a few weeks". [3]

Markets are jittery as they grapple with the tightening monetary environment, fears of stagflation, the war in Ukraine and the Covid- situation in China. The world's second largest economy remains committed to the zero-covid policy amidst the recent surge in cases which exacerbate supply chain disruption.

Earlier in the week, Dr Tedros, the World Health Organization's (WHO) Director General expressed the view that "the approach will not be sustainable and considering the behavior of the virus I think a shift would be very important". [4]

The CPI release caused volatility and two-way action, as inflation eased, but still remains near the 40-year highs and the pair ended the day lower, despite Ms Lagarde's comments. Today it steadies and remains cautious, as investors monitor the aforementioned risk factors, while the monetary policy differential between the Fed and the ECB is still unfavorable for the Eurodollar.

From a technical prospective, not much has changed, as the downward momentum remains intact, despite the recent consolidation. There is increased risk for new lows, although bears may need fresh impetus for a breach of 1.0339.

On the other hand, EUR/USD has shown some resiliency recently and another effort towards 1.0642 cannot be ruled out, but it does inspire confidence. Significant change in sentiment would be required for sustained recovery that would bring the EMA200 (at around 1.0730) in its crosshairs. 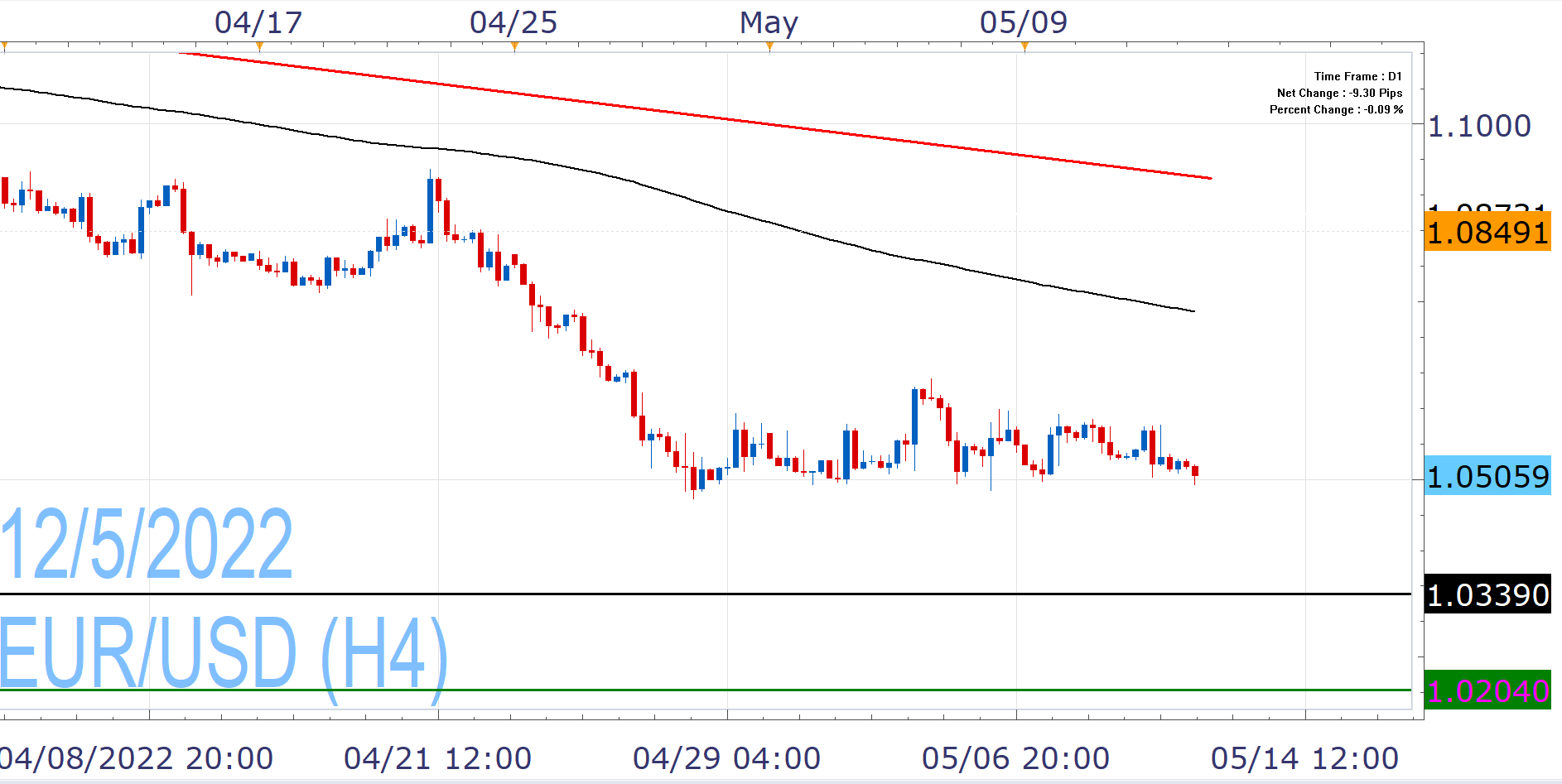