Top Gun: Maverick smashed the box office with the biggest Memorial Day weekend opening of all-time, debuting with $160.5 million in the US in four days as per Variety [1], grossing $300 million globally [2].

The critically acclaimed movie, is the sequel of the 1986 navy air force-themed action drama, that once again features mega-star Tom Cruise in the lead role.

AMC, the largest theatrical exhibitor in the United States and the world as per the company, estimated a 122% increase in the domestic box office compared to the 2021 Memorial Day weekend and noted that more than 3.3 million people watched the movie at a global AMC location over weekend. [3]

Overall, AMC welcomed more than five million moviegoers around the world over the weekend, nearly doubling the customers it had in the same period a year ago.

Around a month ago, the company had reported Revenues of $785.7 million for the first quarter of the year, which was a big improvement year-over-year, but was lower than the $1+ billion reported in Q4 2021, which of course incorporates the busy holiday season. [4]

Its Net Loss narrowed to $337.4 million compared to a net loss of $567.2 million in the first quarter of 2021, while CEO Adam Aaron highlighted the fact that this was the firm's "strongest first quarter in two full years".

Despite the boost from Top Gun's box office success, the stock did not perform well. AMC.us spiked to new May highs on Tuesday, the first trading day of the week, but ended the day with marginal losses and moves towards a losing week.

In late April, the tech juggernaut had reported strong results for the quarter that ended in March (Q3 FY2022), with Revenue of $49.4 billion and Net Income of $16.7 billion, which marked year-over-year growth, but were lower compared to the previous quarter. [5]

Back then, Microsoft (MSFT) had offered upbeat Revenue guidance for the current quarter ending in June (Q4 FY2022), but lowered its projections on Thursday, due to adverse impact from foreign exchange moves. [6]

It now forecasts Revenue of $51.94-$52.74 billion for the fourth fiscal quarter, from $52.4-$53.2 billion, previously, but the downgraded figures are still higher than those of the last three quarters.

MSFT.us dropped at Thursday's open following the news, but quickly recovered and closed the day with profits, helped by the broader sold performance of the stock market.

The company's stock had surged in mid-April after it had reported a Revenue rise to $8.16 billion Adjusted in the first quarter of the year, while Net Loss had narrowed to $784 million. [7]

On Wednesday it went a step further and raised its forecasts, now seeing Revenue fully restored to the Q2 2019 levels at $12.4-12.5 billion, although Capacity recovery was downgraded to 82-83% of those levels. [8]

Despite this upbeat guidance, DAL.us was unable to benefit as broader risk-off mood weighed, posting losses on Wednesday.

XPeng Auto delivered 10,125 vehicles in May, representing a 78% rise year-over-year and was also higher compared to the 9,002 EVs of April, with the P7 sports sedan coming on top. This year, the company has handed over to customers 53,688 cars, as of May 31.

Last week, Xpeng had released mixed financial results for the first quarter of the year, with RMB 7.454,9 billion and disappointing guidance of RMB 6.8-7.5 billion, while earlier in May it had opened its Brand Experience Store in Norway, which is the first European country with the full range of XPeng's EVs. [10]

Nio Inc handed over 7,024 vehicles in May, rebounding from the weak 5,074 deliveries of the prior month, with the company now having surpassed the 200K mark in cumulative deliveries. [11]

The firm noted that production had been gradually recovering from COVID-19 outbreak in China, although deliveries were still constrained to a certain extent. Due to the lockdown measures.

NIO is expected to announce its Q1 2022 earnings on Thursday June 9, before US markets open.

XPEV.us had dropped after the delivery update on Wednesday, whereas NIO.us had closed the day with profits, but both run a profitable week. 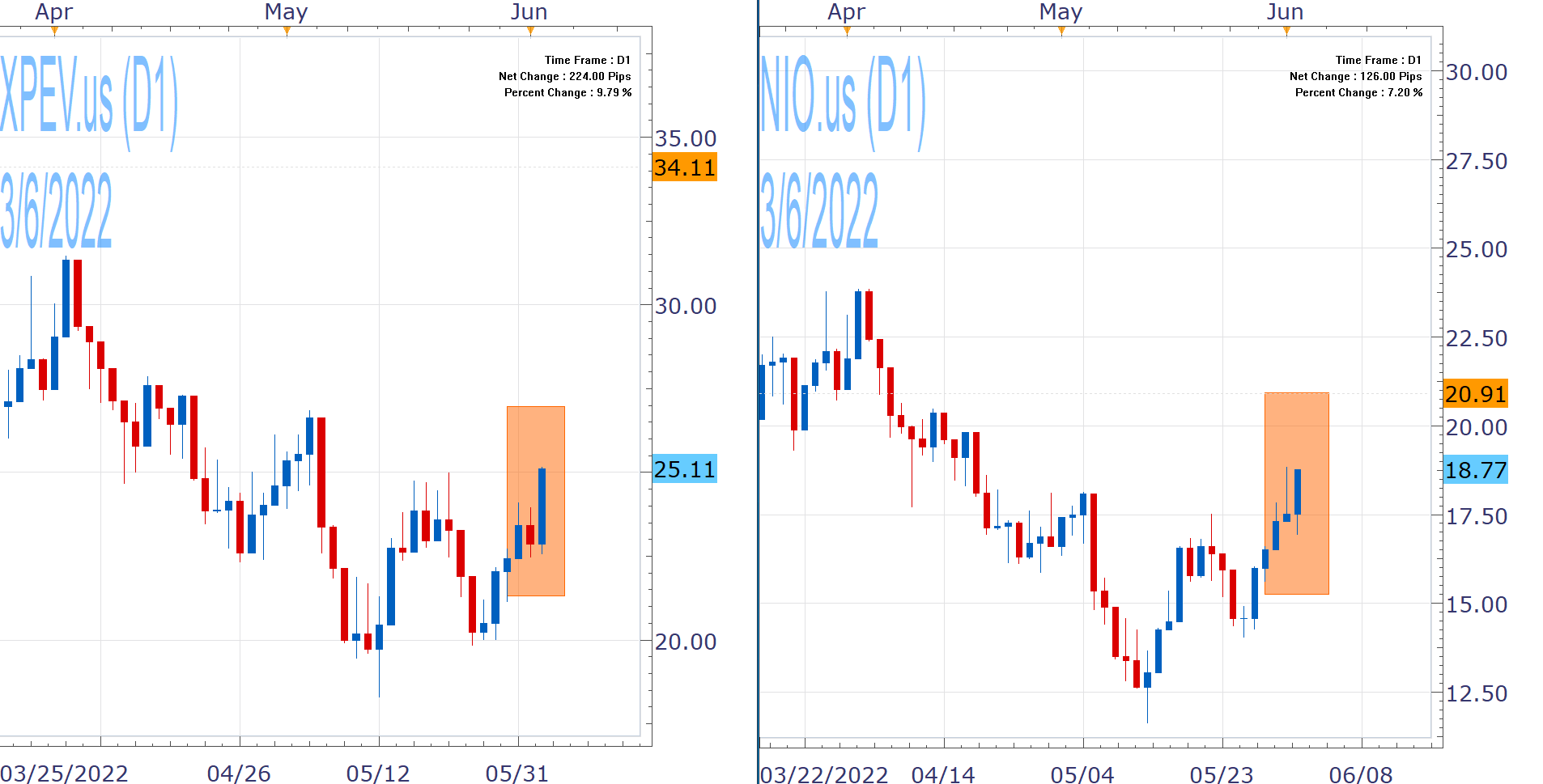 The automaker announced on Thursday that it will be adding more than 6,200 jobs in the United States and convert nearly 3,000 temporary workers to permanent, while investing $3.7 billion. [12]

A large part of this investment and workforce will be allocated in Michigan, in order to –among other things - increase production of the F-150 Lightning electric truck to 150,000 per year, deliveries of which started in May.

The electric pickup truck competes against the R1T of Rivian Automotive, a company in which Ford has invested. Last month, the lock-up period ended and Ford sold 15 million shares of the EV startup, as revealed by two filings with the SEC. [13], [14]