The $19.7 billion deal was announced back in April 2021 and was then expected to be completed by the end of the current year. [1]

The UK regulator announced on Monday that it considering whether this transaction could result in a substantial lessening of competition within any market or markets in the United Kingdom for goods or services, with the two firms having until January 10 to comment. [2]

The European Commission also has on open case in regards to the Microsoft-Nuance agreement, with the provisional deadline due on December 21. [3]

MSFT.us is having difficulties after last month's record highs (35.01) and heads towards a negative week.

The US Consumer Financial Protection Bureau (CFPB) announced on Thursday a probe into companies that offer Buy Now Pay Later (BNPL) services. In particular, it issued orders to collect information on the risks and benefits of these fast-growing loans to Affirm, Afterpay, Klarna, PayPal, and Zip. [4]

The Bureau is concerned about accumulating debt, regulatory arbitrage and data harvesting.

BNPL companies, as the name suggests, give consumers the ability to shop online and pay for their itmes in instalments.

Australian firms AfterPay and Zip saw their stocks dip on Friday after the news. APT.au shed more than 10% and posted 2-month lows, while Z1P.au, dropped more than 6% to its lowest levels since June 2020.

Afterpay had received a A$ 39 billion buyout offer from US firm Square (now Block). Afterpay's board approved the deal this week, after recent delay, with the deal pending Bank of Spain approval. [5] 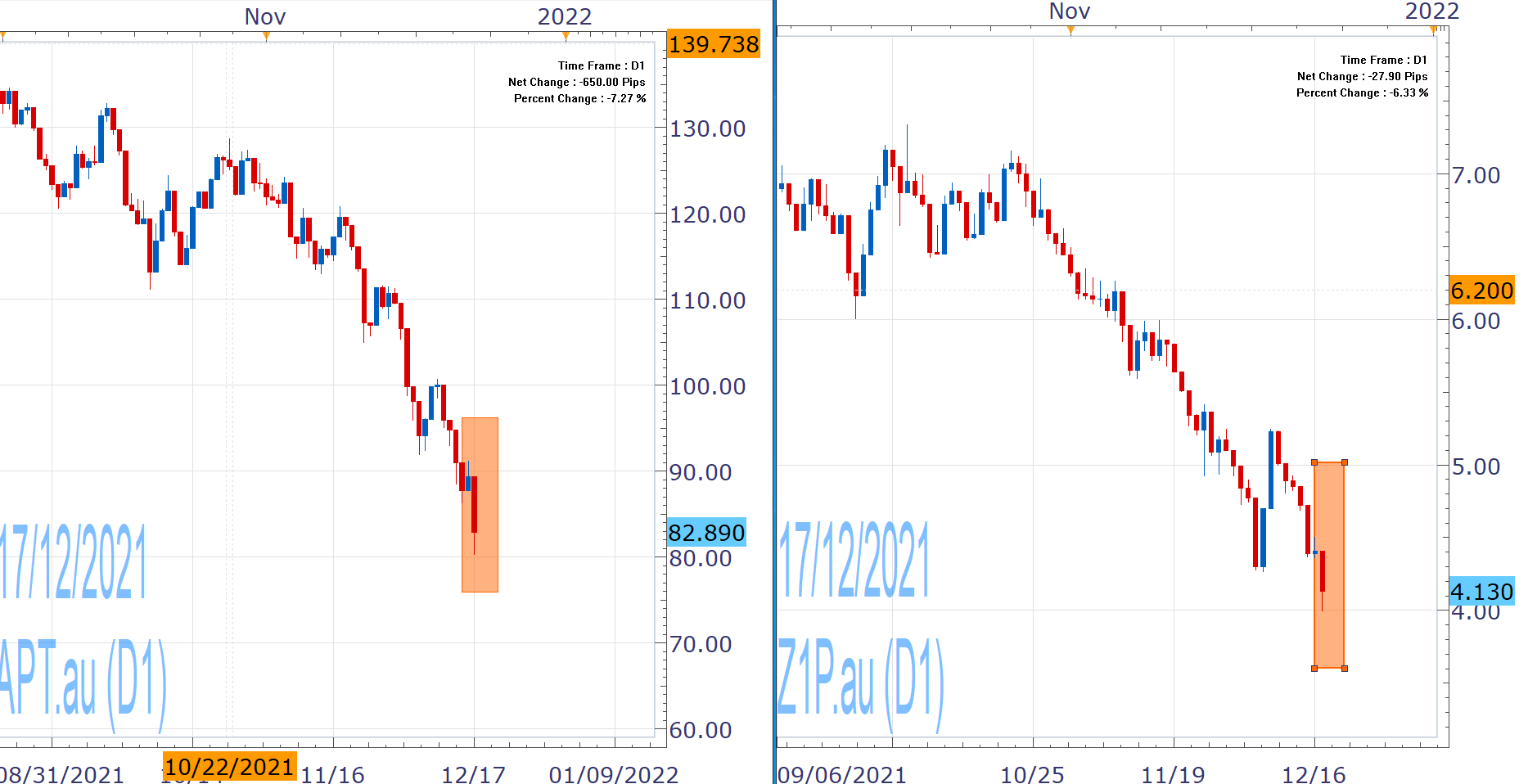 International Airlines Group ("IAG") and Globalia announced on Thursday, that they have terminated the agreement for IAG to buy Air Europa. [6]

Under the agreement, which had been announced on 4 November 2019 and amended on 20 January 2021, IAG's wholly owned subsidiary Iberia, had agreed to acquire the entire issued share capital of Air Europa for €500 million. [7]

IAG and Globalia reached an understanding to evaluate, before the end of January 2022, alternative structures that may be of interest to both companies and offer significant benefits for their shareholders, customers and employees.

The termination came after regulatory scrutiny from the European Commission and the UK Competition and Markets Authority.

In early October, Qantas had laid out plans to update its domestic fleet by 2034, by replacing the Boeing 737-800s and Boeing 717s that currently form the backbone of its domestic jet operations. Boeing, Airbus and Embraer were the considered manufacturers. [8]

On Thursday, the Australian airliner announced that it had picked Airbus, with the A320neo and A220 families selected as preferred aircraft types. A firm commitment for 40 aircraft is expected to be placed with Airbus by the end of FY22 and Qantas will also have a further 94 purchase right options on aircraft over a 10-plus year delivery window. [9]

Airbus stock rallied after on the news, although AIR.fr heads towards a negative week. The European conglomerate had secured another large order, of 255 A321neo Family aircrafts the Dubai Airshow around a month ago, from Indigo Partners.

CSL focuses on rare and serious diseases and influenza vaccines, operates in more than 35 countries and has 25,000+ employees. [11]

Vifor Pharma is a Swiss specialty pharmaceutical company with leadership in renal disease and iron deficiency.

Nasdaq announced on Monday the results of the annual reconstitution of the Nasdaq-100 Index and the addition to it of six companies, which will become effective prior to market open on Monday, December 20, 2021. [12]

Airbnb Inc and Lucid Group Inc were two of them that stood out. Lucid became publicly traded just this July and its CFO Sherry House, commented, that "We are proud to join the prestigious Nasdaq-100 Index, a recognition of our progress establishing Lucid in the EV market and our future growth strategy". [13]

The nominations for the 2022 Golden Globe Awards were announced on Monday, with Netflix dominating the movie categories. However, it was second behind HBO/HBO Max, on the TV segment.

The streaming giant is expected to announce its Q4 2021 financial results, on Thursday January 20 2022.