The US Federal Reserve will announce its monetary policy decision on Wednesday September 22nd at 18:00 GMT, along with the updated economic staff projections, followed by Chairman Powell's press conference 30 minutes later.

As the US economy has been recovering from the pandemic shock and inflation remains persistently high, the Federal Reserve has been debating how and when to start removing some of the stimulus it has been providing for more than a year.

The hawkish camp has definitely been more vocal, as we have seen over that last few months many Fed officials repeatedly calling for a reduction in the pace of the Quantitative Easing (QE) program, under which the bank buys at least $120 billion/month worth of assets.

Mr Bullard of the St. Louis Fed – although not a voter this year - is probably the most aggressive supporter of normalizing policy, having called for tapering to begin within 2021 and conclude in H1 2022.

Despite overall hawkish rhetoric, no member has broken rank in 2021 by voting against the majority to maintain the current stimulus.

Fed Chairman Powell on the other hand, is the main defender of the dovish bastion, and seems highly focused in achieving broad and steady recovery in the labor market, before he starts "removing the punchbowl". In his recent speech at the Jackson Hole Symposium (August 27), he reiterated his cautious stance saying that "At the FOMC's recent July meeting, I was of the view, as were most participants, that if the economy evolved broadly as anticipated, it could be appropriate to start reducing the pace of asset purchases this year. The intervening month has brought more progress in the form of a strong employment report for July, but also the further spread of the Delta variant."

Although there is no official road map for the process of normalizing the current ultra-loose monetary policy, the central bank has been down this path back in 2013, when it was trying to tighten the extraordinary measures it had enacted following the 2007-2009 Great Recession and the collapse of Lehman Brothers.

In May 2013, with the Fed's balance sheet standing above $3 trillion, the then Chairman Mr. Bernanke sparked what came to be known as the "taper tantrum" when he hinted in a Congressional hearing that the bank could take a step down in the pace of asset purchases – the first such public mention.

This sent bonds and stock markets lower, while the eventual tapering of the QE was announced in December of 2013 with a starting date of January 2014, following approximately a year of debate.

When QE tapering begun in January, the Federal Reserve had amassed more than $4 trillion in assets, the Unemployment Rate was above 6.5% and Core Personal Consumption Expenditures (y/Y) stood well below 2%.

The asset purchase program ended in October 2014, the bank then moved into hiking the interest rates in December of the following year and the final phase of tightening started in October 2017 with the unwinding of its balance sheet.

The US economy has been recovering from the pandemic fallout and inflation has been running hot for a while now, putting pressure on Fed to reduce the level of stimulus.

The central bank has a new symmetric 2% inflation target now, which provides more room to maintain its accommodative stance and has consistently maintained the view that price pressures are transitory.

The Fed's preferred inflation gauge, the Core PCE came in +3.6% y/y in July, which is more than double what it was when the Fed started tapering in 2014, although it may find some comfort in Tuesday's Core Consumer Price Index which eased to 4.0% in August.

Inflation however is one part of the central bank's mandate, with the other being full employment. The Unemployment Rate dropped to 5.2% in July, but the latest NFPs were abysmal and the US economy still employees far less people that what it did before the pandemic.
This puts officials between a rock and hard place, as they have to balance between two goals that pull towards opposite directions, while the Delta variant wild card adds another level of complexity to their task.

Furthermore the Fed's balance sheet has ballooned to well above $8 trillion and along with the near zero interest rates, one can understand that if another crisis emerges, the central bank may have diminished capability to act. 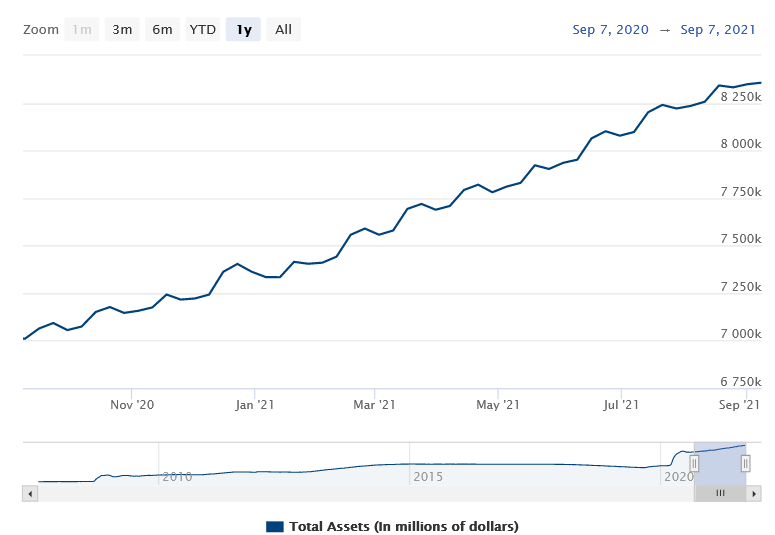 WHAT TO LOOK FOR ON WEDNESDAY

Wanting to avoid communication snafus such the 2013 "taper tantrum", the Fed has done a good job preparing the markets for an eventual policy normalization and if it decides to announce a tapering timeline on Wednesday, no one can seriously accuse officials that they have not gone above and beyond to communicate their intentions, although it would definitely have the potential to rattle markets.

Despite that, with no prep-work having been done in Jackson Hole and with dismal Non-Farm Payrolls earlier in the month, it is probably hard for the central bank to announce a concrete tapering plan on Wednesday. Although this seemed to be the baseline scenario for a while, officials may want to wait and their next window of opportunity will be at the November 2-3 meeting.

The QE tapering timeline is the elephant in the room and regardless of whether we will end up getting more info around it, investors will comb through the policy statement and also Chairman Powell's remarks. Interest rates are forecasted to stay at current 0-0.25% and rate hike path expectations have been downgraded in the aftermath of Mr. Powell's dovish Jackson Hole speech. At the time of writing, CME's Fed Fund futures were projecting higher probability for no rate hike through to February 2023, a contrast from the expectation of rate hikes as early as December 2022 prior to August's Jackson Hole gathering.

The main focal point however, apart form any potential QE commentary, is probably going to be the updated staff economic projections. We will be looking forward to see whether officials will upgrade or downgrade their Inflation forecasts and also whether their view on the rate hike path has changed.

In their last projections which were published in June, official saw a median Federal funds rate at 0.6% in 2023, implying two rate hikes, compared to 0.1% in the previous projections.

Conventional wisdom suggests that any hawkish reference either around the QE and/or the economic projection would be in favor of the US Dollar, while dovish rhetoric would work against it.

However, events like these are complex with many components and have the ability to move markets in both direction and cause increased volatility, requiring caution.

During the last decision of July 28th, the central bank had refrained from providing anything concrete around QE and Chair Powell had struck an overall dovish tone in his press conference, sending the US Dollar lower, despite initial reaction higher.
Back in June the 16thdecision, the US Dollar had jumped, helped mainly by the upgraded rate path projections. 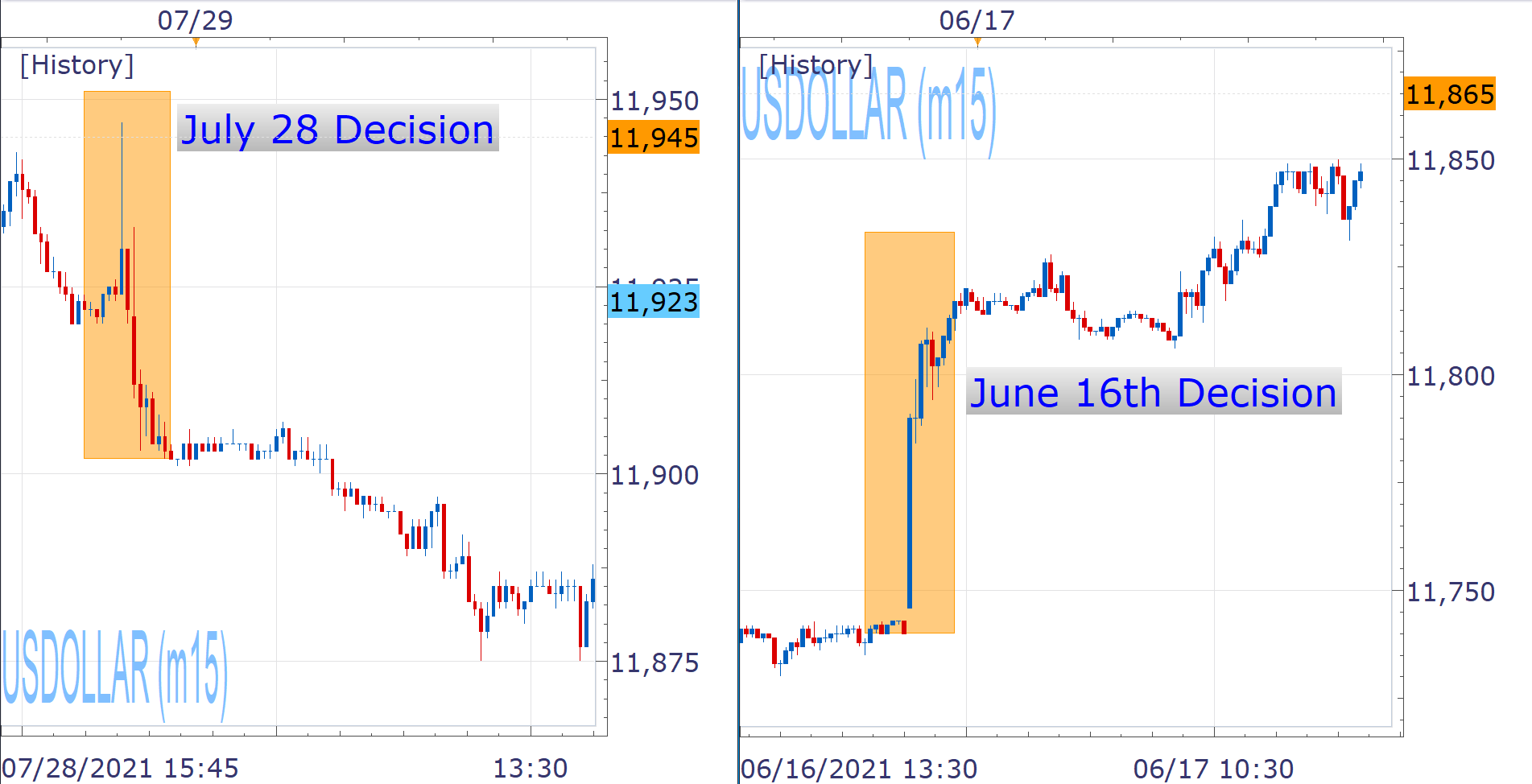 Nikos Tzabouras is a graduate of the Department of International & European Economic Studies at the Athens University of Economics and Business.

He has a long time presence at FXCM, as he joined the company in 2011. He has served from multiple positions, but specializes in financial market analysis and commentary.

With his educational background in international relations, he emphasizes not only on Technical Analysis but also in Fundamental Analysis and Geopolitics – which have been having increasing impact on financial markets.

He has longtime experience in market analysis and as a host of educational trading courses via online and in-person sessions and conferences.

Read more about US Market