After the previous meeting in May, Chair Powell had pointed to 0.5% moves in the next two meetings and had essentially taken of the table larger hikes, as "not something the Committee is actively considering", assuming of course that "economic and financial conditions evolve in ways that are consistent with our expectations". [1]

Yesterday however the US Federal Reserve broke away from this well-telegraphed plan and raised interest rates by 75 basis points, to 1.5%-1.75%, delivering the biggest hike since November 1994.

Mr Powell alluded to the unwonted nature of the massive rate adjustment during his press conference, characterizing it as an "unusually large one", not expecting such moves to be common. Contrary to the previous meeting, this time around, he chose to be less explicit in regards to forward guidance, saying that "either a 50 or 75 basis point increase seems most likely at our next meeting" [2]

Furthermore, the bank released the updated projections with the officials' view on the appropriate policy path, which showed higher rates ahead. In particular, officials now see interest rates at 3.4% by the end of the year (median projection) [3], a pronounced upgrade from prior 1.9% forecast, which points to around 175 basis point worth of hikes.

The dot-plot showed that five official expected rates above the 3.4 median projection, while rates are forecast to go as high as 3.8% next year, before coming down to 3.4% in 2024. 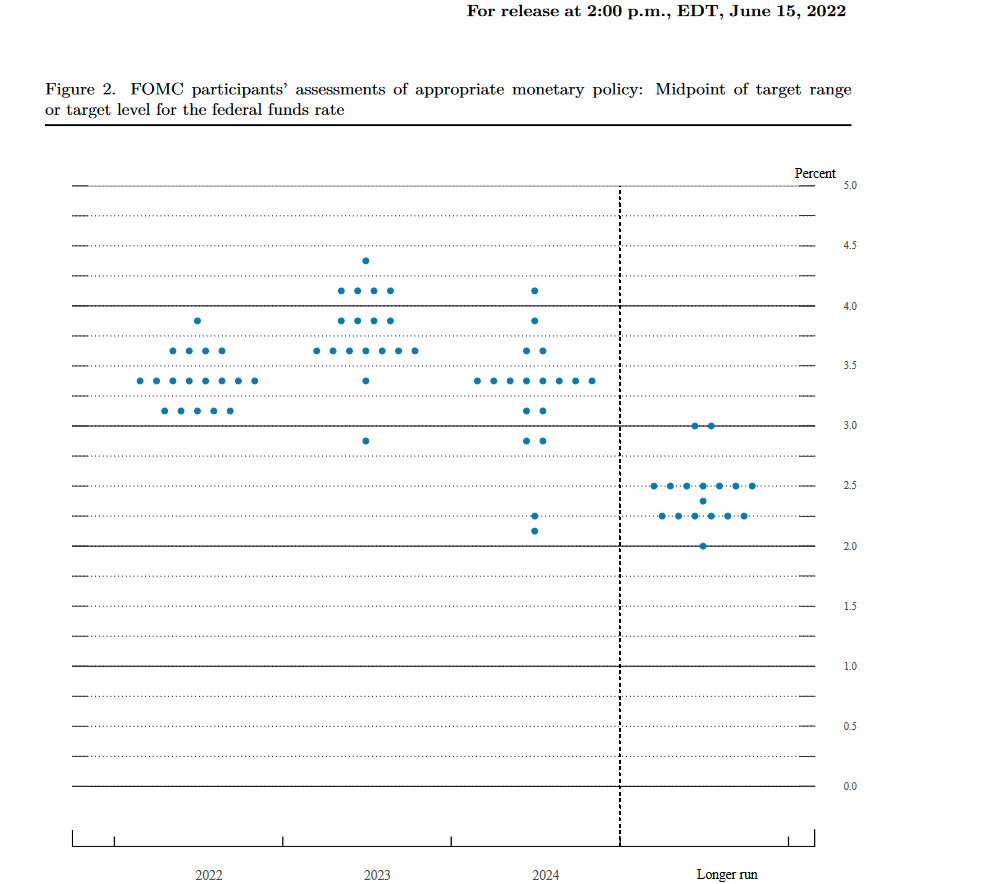 This historic rate hike catered to the aggressive market repricing that occurred after the recent surge in CPI inflation. Last Friday's headline Consumer Price Index, showed a jump to 8.6% in May year-over-year and the highest level since December 1981, after having eased to 8.3% in the prior month.

Chair Powell attributed Wednesday's strong action to this surprise surge in inflation (and the abysmal Michigan Consumer Confidence data), which was contrary to expectations, noting that "By this point we had actually been expecting to see clear signs of at least inflation flattening out and ideally beginning to decline".

In line with recent Fed rhetoric and in tune with recent data, he stressed the bank's resolve to restore price stability and that it is "moving expeditiously to do so". This focus on inflation was highlighted in the policy statement as well, which now contained a new passage, stating that the "The Committee is strongly committed to returning inflation to its 2 percent objective". [4]

More to it, officials have revised higher the inflation forecasts for their preferred measure, the Core Personal Consumption Expenditures (PCE), which excludes food and energy prices. The projections brings it to 4.3% by the end of 2022, before coming down over the next two years, still remaining above the 2% target. As per the latest data, Core PCE had moderated to 4.9% year-over-year in April, while the all-inclusive figure stood at 6.3%

Recently we have seen some international organization downgrading again their economic growth projections for this year, in light of the fallout from the war in Ukraine. The World Bank for example lowered 2022 US GDP growth to 2.5%, from the 3.7 % previously projected and 5.7% in 2021. [5]

The labor market, which is "extremely tight" according to the central bank, has shown resiliency, with Unemployment steading at 3.6% in May. Monetary tightening however will most likely cause a deterioration.

Fed officials now expect it to rise to 3.7% this year and continue rising through to 2024, when it is projected to peak at 4.1%.

The aggressive monetary tightening by the Fed is bound to weigh on economic activity and the million-dollar question is whether it can achieve the goal of bringing down inflation, without causing another surge in Unemployment and without plunging the economy into recession, i.e. delivering a soft landing.

The latest staff projections of high inflation, rise in Unemployment and slower economic growth, don't look like they can assuage stagflation fears, while as we have commented before, Mr Powell's references of "softish" landing don't inspire much confidence.

When asked yesterday, the Fed Chair said that the new Staff Economic Projections (SEP) "would certainly meet that test", but acknowledged that "events of the last few months have raised the degree of difficulty". Furthermore, he echoed prior comments, saying that "there is a much bigger chance now that it will depend on factors that we don't control".

Not the most inspiring comments in our view, but at least we now have a clearer idea of the trade-off between inflation and unemployment, since Mr Powell said that the projected 4.1% rate, with inflation on its way to 2% "would be a successful outcome".

The Fed Chair, was more confident on the state of the US economy, despite the GDP contraction in the first quarter, which he sees at "a strong position and well-positioned to deal with higher interest rates".

We also need to note, that the central bank can only impact the demand-side of inflation and factors such as high energy and commodity prices are out of its control, casting doubt to whether it can deliver on the pledge to bring it down.

Furthermore, it spent most of last year considering high inflation transitory, before being forced to change tack, while yesterday Mr Powell admitted that they were once again surprised by the latest CPI surge.

This has injured the Fed's credibility, which increases the chance of policy mistake, meaning that the Fed may overdo it with tightening and thus harm the economy. Mr Powell yesterday said that the biggest mistake, would be to fail in restoring price stability.

Yesterday's decision created volatility and the aggressive hike led to a knee-jerk reaction higher for the US Dollar and lower for the stock and bond market. However, as Mr Powell's press conference got underway, the moves reversed. The US Dollar ended Wednesday lower, while SPX500 closed the day higher. 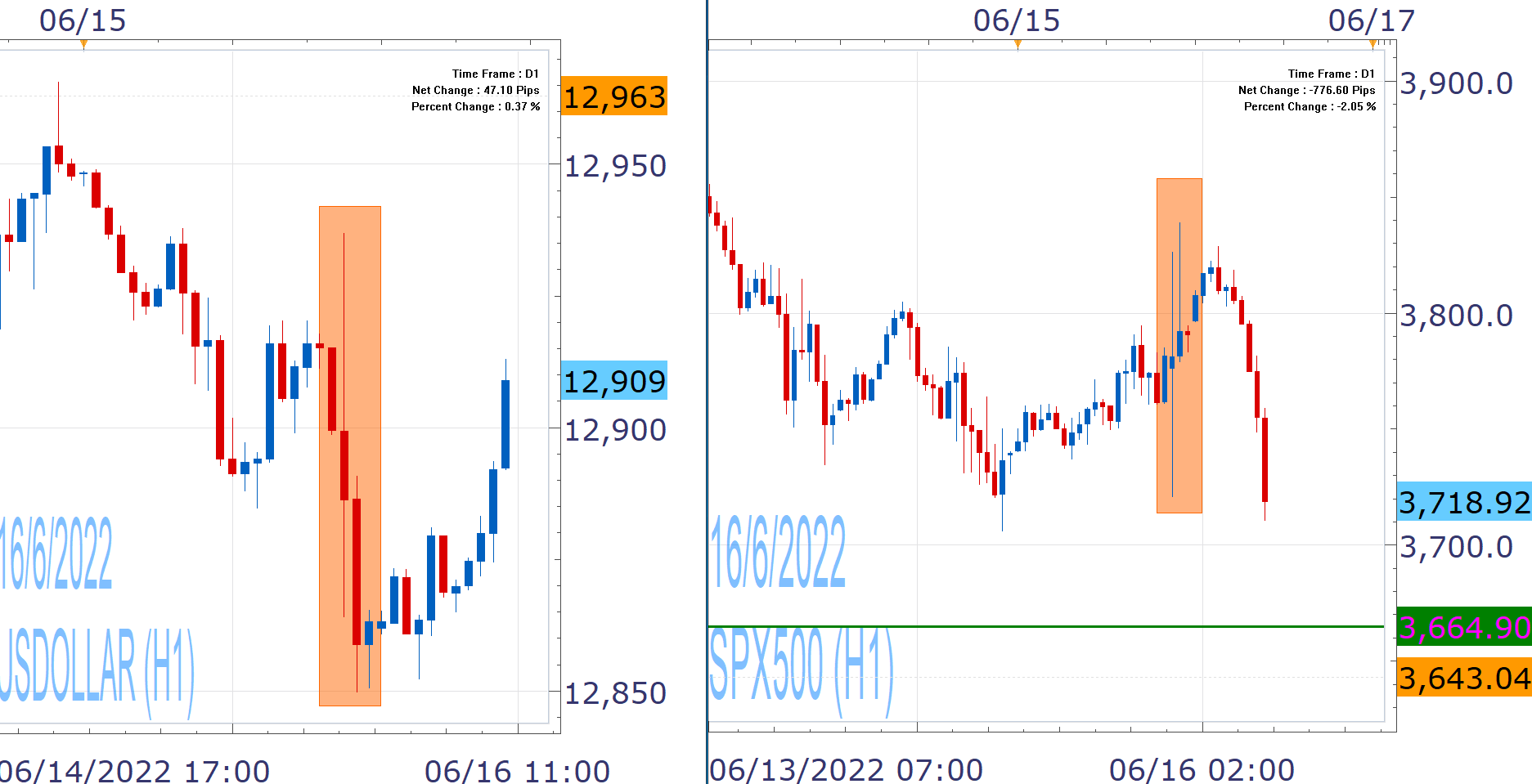 This was because markets were already expecting the historically big hike, while Mr Powell seemed a bit dovish in our opinion, by talking of an unusual move and of 50 or 75 basis points hike in the next meeting.

However, we don't think the bank inspires confidence in avoiding a hard landing, a task that is in any case very difficult and given the aggressive tightening path, we struggle to see how the stock market will not face further pressure - although a lot will depend on upcoming data.

Markets already seem to rethink yesterday's reaction, as the US Dollar rises today and SPX500 erases Wednesday's gains and trades in bear territory, at the time of writing.