The International Energy Agency (IEA) confirmed on Thursday, the largest stock release in its history, as it provided the details of the April 1 unanimous agreement. The member countries committed to the release of 120 million barrels of oil over a six month period. This is the second such action form the agency after the war in Ukraine began, which combined, amount to 9% of the members' total emergency reserves. [1]

Half of the 120 million announced yesterday, is part of the larger US plan that was announced by President Biden last week. Mr Biden had then authorized the release of 1 million barrels/day for the next six months - over 180 million barrels - from the Strategic Petroleum Reserve (SPR). [2]

This was the third release under the current administration and the second one related to the war in Ukraine, which came not long after the US had banned all oil imports from Russia. [3]

Although last week there was some optimism from the new round of peace talks between Russia and Ukraine, tensions have escalated due allegations of Russian atrocities against civilians, which Russia has denied. The United Nations (UN) General Assembly voted yesterday to suspend Russia from the Human Rights Council. [4]

The situation has led to new Western sanctions against the invading country and further aid towards Ukraine. Yesterday, NATO Secretary General Stoltenberg said the allies "should do more, and are ready to do more" [5], following a request for more support from Ukrainian Foreign Minister Kuleba who emphatically asked for "weapons, weapons, and weapons" [6].

A day earlier, the US Department of Defense had announced the dispatch of additional javelin anti-armor systems to Ukraine, which will bring the total U.S. security assistance to the country, to more than $1.7 billion since the start of the war. [7]

The war and relevant sanctions against Russia are driving inflation higher and at the same time have an adverse impact on trade and economic activity, which has sparked fears of stagflation.

Earlier in the week, the World Bank downgraded its GDP 2022 growth forecast for China to 5%, form 5.4% in the October projections and far lower than the 8.1% growth of 2021 [8]. China is the world's second largest economy and oil consumer.

The country is also experiencing a rise in Covid-19 cases recently, with today's data showing 1,576 new infections for April 7 and 22,648 new asymptomatic cases in the mainland [9]. At the epicenter of this is the trade hub and port city of Shanghai which has imposed lockdown measures that can impact factory and trade activity.

Although the war in Ukraine and the disruption in oil flows are supportive for prices, fears of slower economic growth and the aforementioned reserve releases put pressure on USOIL, which is in risk of a second straight negative week.

Near-term bias is on the downside, since its trades below the EMA200 (black line), putting the commodity in danger of further decline below the ascending trendline from the December lows (at around 91.00). This would expose it to the 200Days EMA (83.30), although it may be early for such moves.

On the other hand, the big picture probably still favors the USOIL, which can push higher, but will likely need a catalyst to break above key 102.30-104.00 region, that would revive its ascending prospects. 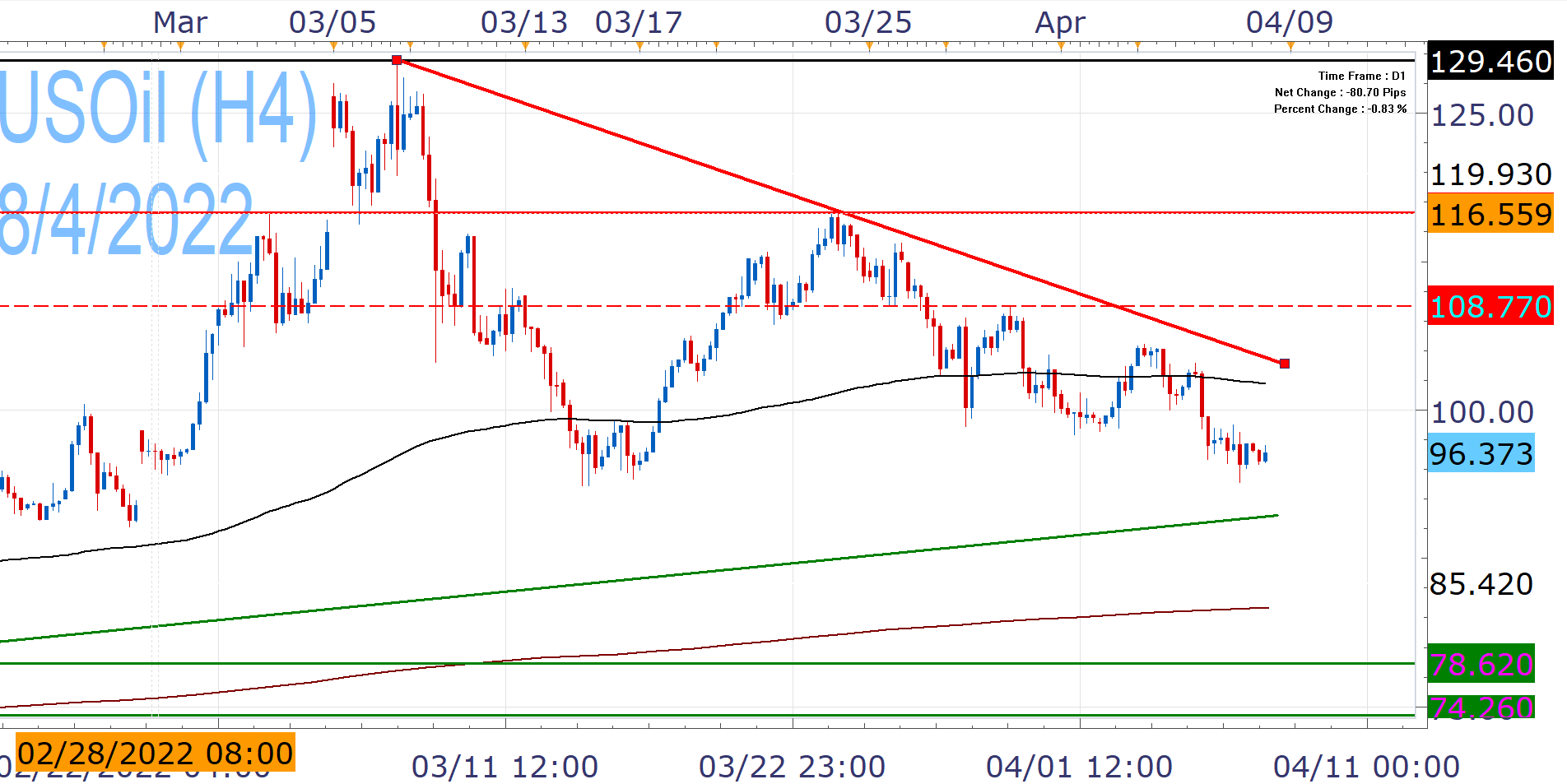