The central bank's duty is to contribute to the stability of the currency (AUD), full employment, and the economic prosperity and welfare of the Australian people. It does this by conducting monetary policy to meet an agreed medium-term inflation target, working to maintain a strong financial system, efficient payments system and issuing the nation's banknotes.

The RBA seeks to keep consumer price inflation in the economy to 2–3%, on average over the medium term. Over recent decades the bank has targeted the cash rate – the rate charged on overnight loans between commercial banks. Additionally, since March 2020 the Reserve Bank has also been targeting the yield on the 3-year Australian Government bond to help lower funding costs across the economy.

Under its current Governor Philip Lowe, who assumed office in the second half of 2016, the bank seemed to have been focusing more on employment, compared to what it had been doing in the past. This became evident in the post-COVID era, with the Governor's address on the Committee for Economic Development of Australia's annual dinner in November 2020.

Mr Lowe said that there has been "a shift in the relative weight given to jobs and inflation in our communication" and that "the Board wants to do what it can, with the tools that it has, to support the national effort to reduce unemployment".

Despite encouraging economic indicators, the situation around COVID-19 has worsened over the past few months due to the fast spread of the Delta variant.

The below chart is revealing of this fact, showing the recent big increase in Australia's Daily Reported Cases, while Cumulative Cases were 63,154 as of September 6th. 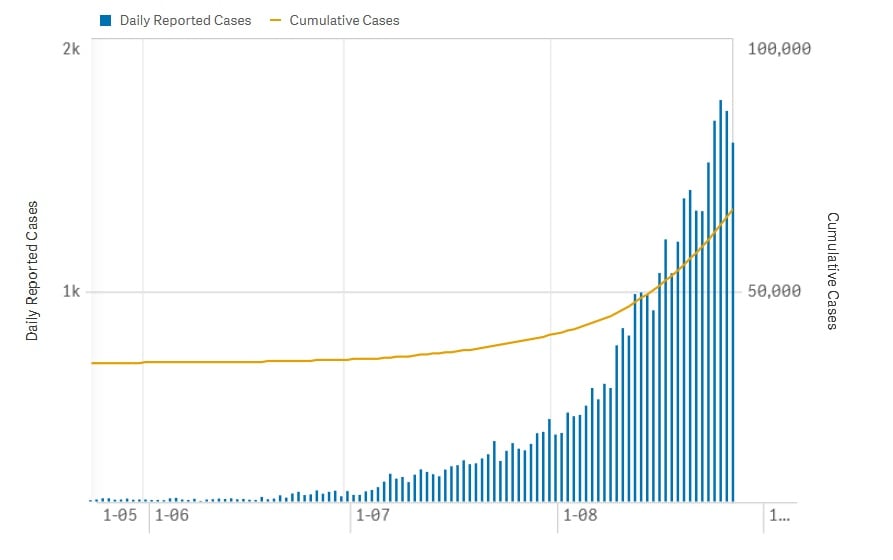 Back on July 6th, the Reserve Bank of Australia had announced plans to extend the duration of its bond purchase program (QE) past the early September completion date, given that "we remain some distance from the inflation and employment objectives", but at a lower weekly pace "responding to the stronger-than-expected economic recovery and the improved outlook".

In particular, the bank decided to extent QE until at least mid-November when it would conduct a further review with a tapered amount of $4 billion/week (from $5 billion/week).

Going into the August 3rd meeting, some market participants had been anticipating that the RBA would walk back on this plan as COVID-19 infection rates had started to rise, but the bank stuck to its QE script.

With the pandemic situation worsening, market talk for a reversal of the July QE planning persisted, so the bank definitely had a difficult job balancing between the announced policy normalization path and the dimmer outlook, due to the surge in coronavirus infections.

On Tuesday September 7th, the RBA decided to move forward with its plan and reduced government securities at $4 billion/week, but extended the horizon until at least mid-February 2022 (from prior mid-November planning). This balancing act reflected the "delay in economic recovery and the increased uncertainty associated with the Delta outbreak".

Furthermore it offered a downbeat economic outlook assessment, saying that "GDP is expected to decline materially in the September quarter and the unemployment rate will move higher over coming months" due to the recent coronavirus outbreak, although it expects this setback to be temporary.

AUD/USD initially reacted higher on the news that the central bank moved forward with reducing the pace of its asset purchases. However, this looks like a tapering in name only and along with the duration extension and downbeat economic outlook, the pair quickly erased those gains.