Inflation has been running rampant for quite a while now, with the Fed's preferred measure, the Core Personal Consumption Expenditures (PCE), having climbed to 5.2% year-over-year in January – the highest levels since the early 80s. Core PCE excludes energy and food prices, while the broader Headline PCE had surged 6.1% year-over year, which marked the highest print since 1973.

The most recent data on inflation, were released on Thursday, in the form of the Consumer Price Index (CPI). The core reading rose 6.4% year-over-over-year and the headline CPI increased 7.9% year-over-year – both figures being the highest since 1982.

The recovery of the labor market had been slow and fragile, with some disappointing figures from the Non-Farm Payrolls. The most recent releases however, have been encouraging, with the last print having revealed the addition of an impressive 678K jobs in February.

The Unemployment Rate declined to 3.8% and the number of unemployed persons edged down to 6.3 million – still lower though than the pre-pandemic levels of 3.5% and 5.7 million respectively. The Labor Force Participation Rate, a constant laggard, also was below pre-pandemic levels, but ticked up to 62.3%.

The Fed's dual mandate dictates the pursuit of stable prices and maximum employment, but the central bank had focused on the latter, for the most part of the last year, while high inflation was described as "transitory". The data however compelled Mr Powell to retire that term in late November [1] and the bank to make combatting inflation its top priority, embarking on an aggressive tightening path to achieve that.

This normalization process started with the reduction of the asset purchases in November, with initial tapering amounts that would lead to a conclusion of the Quantitative Easing program by mid-2022. However, officials quickly adopted a more aggressive tapering, to end the program this month.

In particular, as per the Executive Vice President of the New York Fed, the FOMC's net purchases of Treasury securities and agency MBS should come to an end within this week [2]. Net purchases under the QE which was adopted to combat the economic fallout of the Covid pandemic, totaled roughly $4.6 trillion and inflated the Fed's portfolio to nearly $9 trillion. [3] 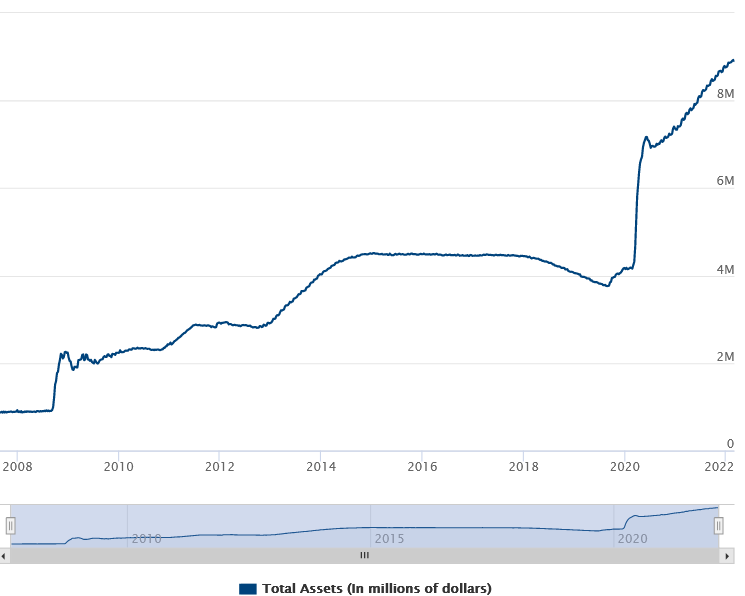 The next step will be the reduction of the balance sheet, a process known as Quantitative Tightening, which officials expect to begin after the first rate hike, but have not yet provided details. [4]

The previous tapering cycle had taken place in 2014 and was a slower process, as it had lasted almost a year, while the unwinding of the balance sheet had begun around three years later, in late 2017.

The Fed's primary monetary policy tool, is the interest rates, which were slashed to current 0-0.25% in the wake of the pandemic. Officials have pointed to lift-off in this meeting and multiple hikes ahead, as the next step in policy normalization, with some debate around the size of those moves.

Some members have been open to bigger than 25 basis points increases, with Fed of St Louis President, Mr Bullard, probably being the most hawkish and vocal member of the Fed. Mr Bullard who is a voter, had called for 100 basis point increase by July 1, during a February CNBC interview [5], which would require at least one 50 basis point adjustment.

Most recently however, Chair Powell erred on the less aggressive side, saying that he is "inclined to propose in support of 25 basis point rate hike" in March, during this month's Congress testimony [6], without ruling out a larger increase in that meeting or in an upcoming one.

Officials will have the chance to offer their latest views on the appropriate rate path, since Wednesday's announcement includes the updated-dot plot, which will once again be closely watched. The previous one in December, had revealed that 12 of the 18 members, were expecting three increases within 2022. [7] 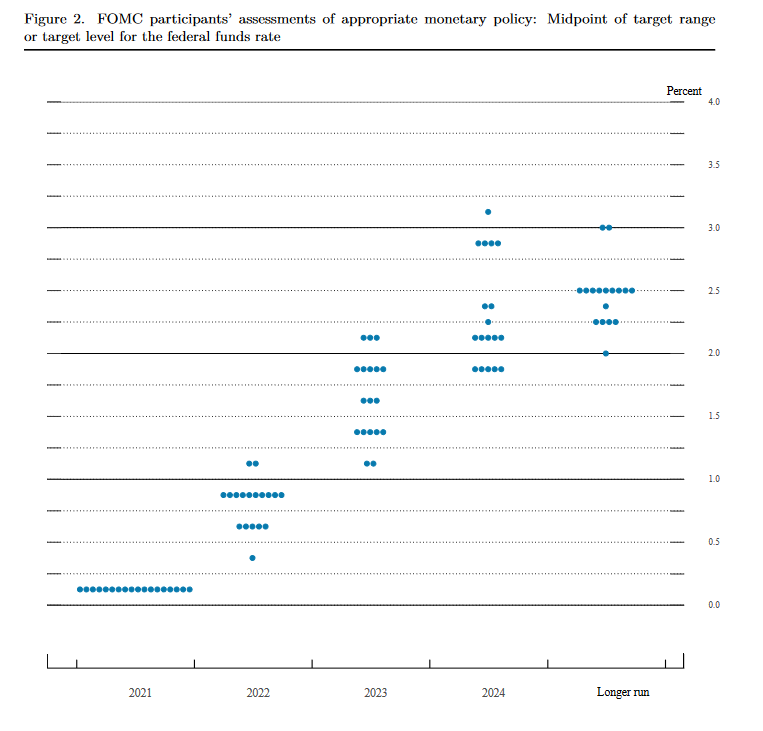 Until recently, markets have been very aggressive in their pricing for the Fed's interest rate path, projecting a half-point move this month and as many as seven hikes within the year. From mid-February though, those expectations have eased.

At the time of writing, CME's FedWatch Tool projects a 25 basis point rise in this meeting, with 97.8% probability. By year-end, the highest probability (33.5%) is assigned to rates standing at 1.75-2.00%, implying up to seven quarter-percentage hikes. [8]

The war in Ukraine has added another source of worries for central banks around the globe. The military conflict and the sanctions against Russia have led to a surge in oil and energy prices, which will likely push inflation higher.

President Biden warned as much this week, when he announced the ban of Russian oil, liquefied natural gas and energy, noting that there would be "costs" for the US as well. [9]

After yesterday's CPI release, Treasury Secretary and former Fed Chair Ms Yellen, commented that the uncertainty around the situation in Ukraine is "exacerbating inflation", in an interview on CNBC [10]. She also expressed the view that "We're likely to see another year in which 12-month inflation numbers remain very uncomfortably high".

Additionally, this situation can further strain supply chains and become a drag on economic growth, which has created fears of stagflation, although direct impact to the US economy is likely going to be limited. Ms Yellen does not expect a recession in the US, based on her comments on that CNBC interview. [11]

Already before the conflict, there were projections for slower global and US growth in 2022. The International Monetary Fund (IMF) for example, had downgraded in January its 2022 GDP projection for the United States to 4%, from 5.6% in 2021 and 4.5% in the previous forecast. [12]

Higher inflation favors the tighter monetary policy that the Federal Reserve has embarked upon, but a slowdown in economic activity may complicate its job, since it could pull in opposite directions.

The US central bank hands down its potentially highly consequential monetary policy decision, on Wednesday March 16 at 14:00 NY time, in a backdrop of surging inflation and potential complications from the situation in Ukraine.

Investors will have a lot to unpack, as they will be waiting to see if the Fed will raise rates indeed, by how much and whether the decision will be unanimous or whether there will be dissenters.

Moreover, they await the updated staff projections, including the dot-plot, for insights on the officials' thinking around the appropriate rate path.

They will also be waiting to see if the central bank will offer more details around the process of the balance sheet normalization and of course, the subsequent press conference of Chair Powell.

Caution is needed, since the event has the potential to cause volatility, two-way action and produce outsized moves, as market participants will be digesting all the aspects of the announcements.