After much fanfare, tweets and comments, Elon Musk clinched a deal to buy Twitter and take it private, in late April, for $54.20 per share [1]. However, the saga may not be over yet, since the Tesla (TSLA) CEO just put the deal on hold.

In a tweet earlier today, he said that the agreement is "temporarily on hold" until he can verify that fake/spam accounts are less than 5% of users [2]. This is the percentage that the firm had disclosed in a filing with the Securities and Exchange Commission (SEC) last week. [3]

The stock (TWTR) of the social media firm was losing around 14% in pre-market, at the time of writing, after the news.

Based on the agreement between the two sides, there is a termination fee of $1 billion. [4]

The online cryptocurrency exchange platform reported a bad first quarter, as its Net Revenue dropped to $1.165 billion and it also slipped into a Net Loss of $430 million, form a Profit of $840 million in the previous quarter. [5]

The results came in a backdrop of cryptocurrencies decline and recent market rout due the collapse of stablecoin LUNA. Bitcoin was the most traded product on Coinbase, with BTC/USD having lost more than 50% from its Novemeber record highs, at the time of writing.

The firm attributed the poor quarterly results to lower crypto prices and market volatility, but remains "as excited as ever about the future of crypto".

COIN.us dropped after the earnings report, shedding more than 40% on the week, which is poised to be the sixth consecutive losing one.

The company posted solid financial results for the for the second quarter of Fiscal Year 2022 (period ended April 2) on Wednesday, with the focal point being the streaming services figures, in the aftermath of Netflix's (NFLX) shocking loss. [6]

Those did not disappoint, since Disney+ added 7.9 million paid subscribers in the reported quarter, bringing total users across all services to more than 205 million as of April 2. The Parks, Experiences & Products posted its fourth straight profitable quarter, with Operating Income of $1.755 billion in Q2 FY2022.

The strong metrics and results, cause the Chief Executive Officer (CEO) Bob Chapek to proclaim that "we are in a league of our own".

Investors did not seem to share the enthusiasm though, in an overall bad week for Wall Street, since DIS.us dropped to two-year lows on Thursday after the results.

The stock of Apple (AAPL) entered bear market territory on Thursday, as AAPL.us closed the day more than 20% lower from the January record high (183.05), which is generally viewed as the threshold.

This comes in a backdrop of increasing interest rates, as the Fed delivered its second straight hike and the largest one in 22 years last week, pointing to more hikes ahead and announced a plan to reduce its balance sheet. High interest rates and hot inflation create an unfavorable environment for the tech sector, as investors also grapple with prospects of stagflation.

The firm's latest quarterly results in late April had underwhelmed Wall Street and CFO Luca Maestri had issued a sales warning for the next reporting quarter in the range of "$4 billion to $8 billion" [7]. It also slipped to the second place behind Samsung in Q1 in the global smartphone market, according to Canalys' research, with 18% market share and 56.5 units shipped. [8]

Apple however, which is flush with cash is often viewed as a safe-haven, has performed better than the broader tech sector, since at the time of writing NAS100 was erasing around 25% since tha start of the year, whereas AAPL.us had dropped around 20% as of yesterday's close. 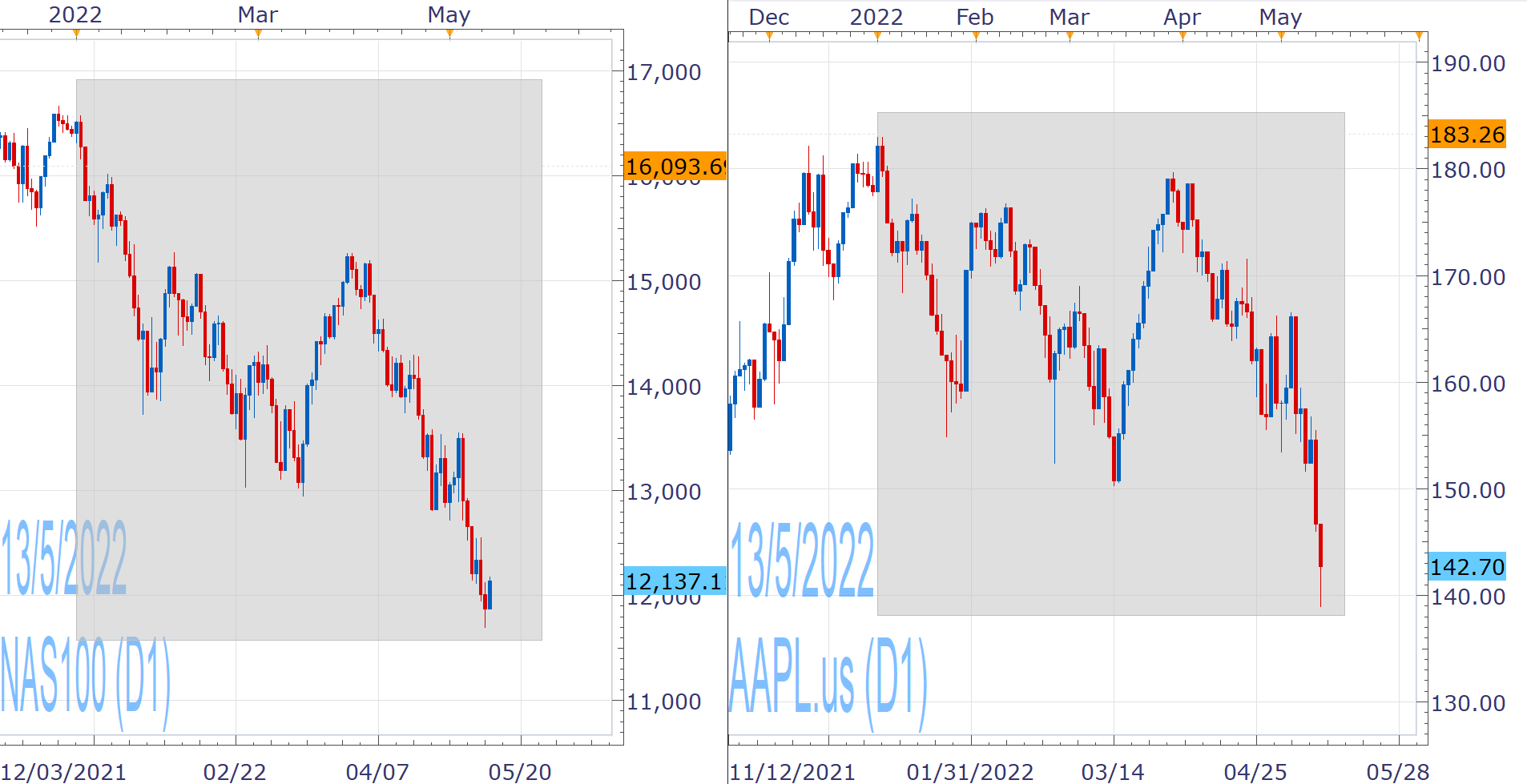 The Ford Motor Company is one of the early backers of the EV start-up Rivian, but its stock has plunged this year, with RIVN.us erasing more than 70% year-to-date. The legacy automaker had announced a mark-to-market loss of $5.4 billion from the investment in the electric vehicle maker in its earnings report latte-last month. [9]

The two companies now compete in EV truck market, since Ford recently started delivering its highly anticipated F-150 Lightning. Earlier in the month, it had announced its April US Vehicles Sales, which rose to 176,965, from 159,328 in March, but were 10.5% lower year-over-year. [11]

On Wednesday, Rivian Automotive reported a narrower Net Loss of $1.593 billion in Q1 2022 compared to the previous quarter, more than 90,000 preorders for its R1 truck in the US and Canada as of May 9 and reaffirmed its 25,000 vehicle production target for the full year. [12]

The earnings season winds down in the United States, but Chinese companies fill in the gap.

Retail and tech giant JD.com and smartphone maker Xiaomi, are some of those that stand out, reporting their Q1 2022 results on Wednesday and Thursday respectively.