At the previous meeting in early November, the central bank had announced that they would begin reducing their asset purchases program by $15 billion in that month and by another $15 billion in December, without committing for the rest of the horizon. If this pace would be maintained, the program would conclude by mid-2022. [1]

Minutes of the aforementioned meeting, later revealed that some officials already preferred a somewhat faster pace of reductions that would result in an earlier conclusion to net purchase. [2]

The Fed has been turning increasingly hawkish lately and the Omicron jitters did not change that either, since its Chairman, Mr Powell said on Tuesday November 30 during his Senate testimony, that it would be appropriate to consider wrapping up the asset purchases a few months sooner and expected the topic to be discussed on the upcoming meeting. [3]

He also seemed to downplay the recent Omicron variant, noting in his opening remarks that the bank can only assess its impact on the economy when more data around are available. [4]

Rampant US Inflation has been the main driver behind the central bank's hawkishness and the Omicron variant only seems to have increased fears around it.

The Fed's preferred gauge of inflation, the Personal Consumption Expenditures (PCE), has also been rising fast as well. Headline PCE rose 5.0% y/y in October and the Core 4.1% y/y, with the next update due on December 23.

The central bank had long maintained that high prices were of transitory nature, but we had seen a gradual shift away from that view, before Chairman Powell putting the term "transitory" to rest during his Senate testimony last week [3].

Stable Prices is one of the Fed's dual mandate, with the other being maximum employment. The latter has held the central bank back, as it remains in pre-pandemic levels and recovery of the labor market has been fragile and inconsistence.

The latest Non-Farm Payrolls (NFPs) at the beginning of the month, revealed the disappointing addition of only 210K jobs in November. The Unemployment Rate however continued its descending path, as it dropped to 4.2% (from 4.6% prior). Most importantly, the Participation Rate, which has been the main source of frustration, picked up to 61.8% (vs 61.6% prior).

Another reason for optimism was last week's Jobless Claims, which dropped to 184K – the lowest level since September 6, 1969.

The US Federal Reserve will be handing down it monetary policy decision on Wednesday December 15, at the conclusion of its two-day meeting. It will be accompanied by the updated staff economic projections and followed by Chair Powell's press conference.

We will be looking forward to see whether the Fed will announce higher rate of QE reduction from January on and in general anything more concrete regarding its tightening path.

Rates hikes are not for immediate consideration (currently at 0-0.25%), but if officials are willing to conclude QE earlier than previously thought, say Q1 2022, then maybe it is not too early for them to discuss potential lift-off date.

The Fed's dot-plot will be revealing of the officials' intention on that front, although these projections do not constitute official policy.

The last staff projections that were published in September were rather hawkish, since they had shown that half of the officials were expecting higher rates in the next year, with the rest seeing them at current levels (9 vs 9). For 2023, all but one member expected higher rates. [5] 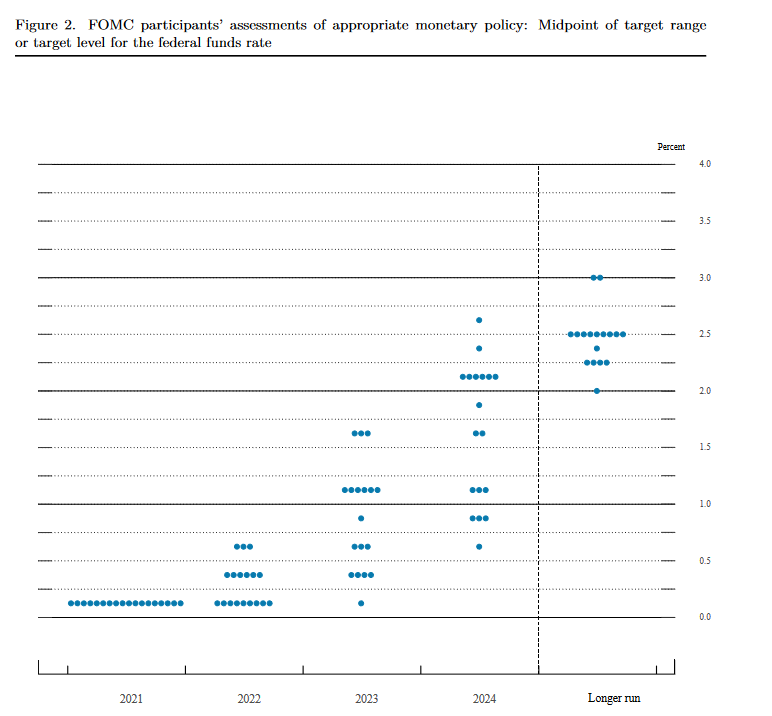 Given the recent commentary from the central bank and its members, one would reasonably expect these projection to be revised higher at this week's meeting.

Markets have been rather aggressive in their expectations for the Fed's rate hike path, with CME's FedWatch Tool implying lift-off in May 2022 with 44.1% probability, at the time of writing. [6]

The US Dollar had reacted lower after the last monetary policy, when the central bank had announced the reduction its asset purchases program, as this was seen as a somewhat dovish taper. The next day however and that week, were higher, as the tightening path was supportive.

December has been good for the US Dollar so far, following last month's stellar performance, but last week it ended the 6-week profitable streak.

Conventional wisdom suggests that a hawkish outcome will help the greenback, but market reaction also has to do with expectations and remains to be seen, to what extend the Fed's hawkishness has been priced in. Furthermore, these events can potentially spur volatility and lead to two-way moves as they consist from many components (policy statement, staff projection, press conference etc), requiring caution.