Recent News from US & China

Today's economic data from China offered reason for optimism, since Industrial Production rose by 0.7% in May year-over-year, compared to a contraction of 2.9% last month. Retail Sales dropped by 6.7% year-over-year in the same month, but this is better than expected and improved over April's 11.1% decline.

The country's National Bureau of Statistics (NBS) sounded upbeat, noting that the economy showed a "good momentum of recovery" last month. It also said that the negative effects from the Covid-19 pandemic were "gradually overcome", but warned of continued "difficulties and challenges". [1]

Retail Sales from the US that were released earlier however, painted a more bleak picture, since they revealed an 0.3% drop in May on a monthly basis, from a 0.7% increase prior.

China may have recently eased pandemic curbs, but the Covid-19 situation remains difficult and cases elevated. Today's data showed that the mainland had 119 locally transmitted case on June 14 symptomatic and asymptomatic). [2]

Meanwhile, US President Biden will travel to Saudi Arabia after all, which of course is one the top oil producing countries globally and the de facto leader of OPEC. The visit will occur in July in acceptance of the invitation from King Salman and will be part of a broader visit in the Middle East. [3]

The agency believes that the markets will rebalance helped by a rise in global supply, but warned that this may prove "short-lived", threatened by the sanctions against Russia and other factors, adding that "global oil supply may struggle to keep pace with demand next year".

Earlier this week, the Petroleum Exporting Countries (OPEC) had released its own monthly report, seeing 2022 world oil demand growth broadly unchanged at 3.4 million barrels/day. The release also showed that OPEC's oil production dropped by 176,000 barrels/day in May, compared to April. [5]

The US Federal Reserve had laid out a well-telegraphed plan to raise interest rates by 0.5% in today's meeting and in July. Friday's surge in May's CPI inflation to 8.6% and the highest level since December 1981, has casted doubt as to whether the central bank will stick to this communication.

There has been an aggressive repricing in markets, which now expect a bigger 75 basis point hike today and next month, as per CME's FedWatch Tool, which assigns probability of 97.8% and 97.3% respectively to this outcomes, at the time of writing. [6]

The possibility of an even more aggressive tightening by the Fed, has increased fears of economic slowdown, which of course can dent demand for oil.

The commodity had registered three month high on Tuesday (123.69), but ended the day with losses and trades with caution today, ahead of the Fed decision which can spur volatility and determine its move.

Form a technical prospective, USOil is in danger of pressure that could test EMA200 (113.50-70), but a catalyst will be required for further losses that that would send it towards the ascending trendline and beyond (mid-106.00).

However, above the EMA200 bulls are in control and have the ability to push for fresh highs, but they don't yet inspire confidence for surpassing 129.46. 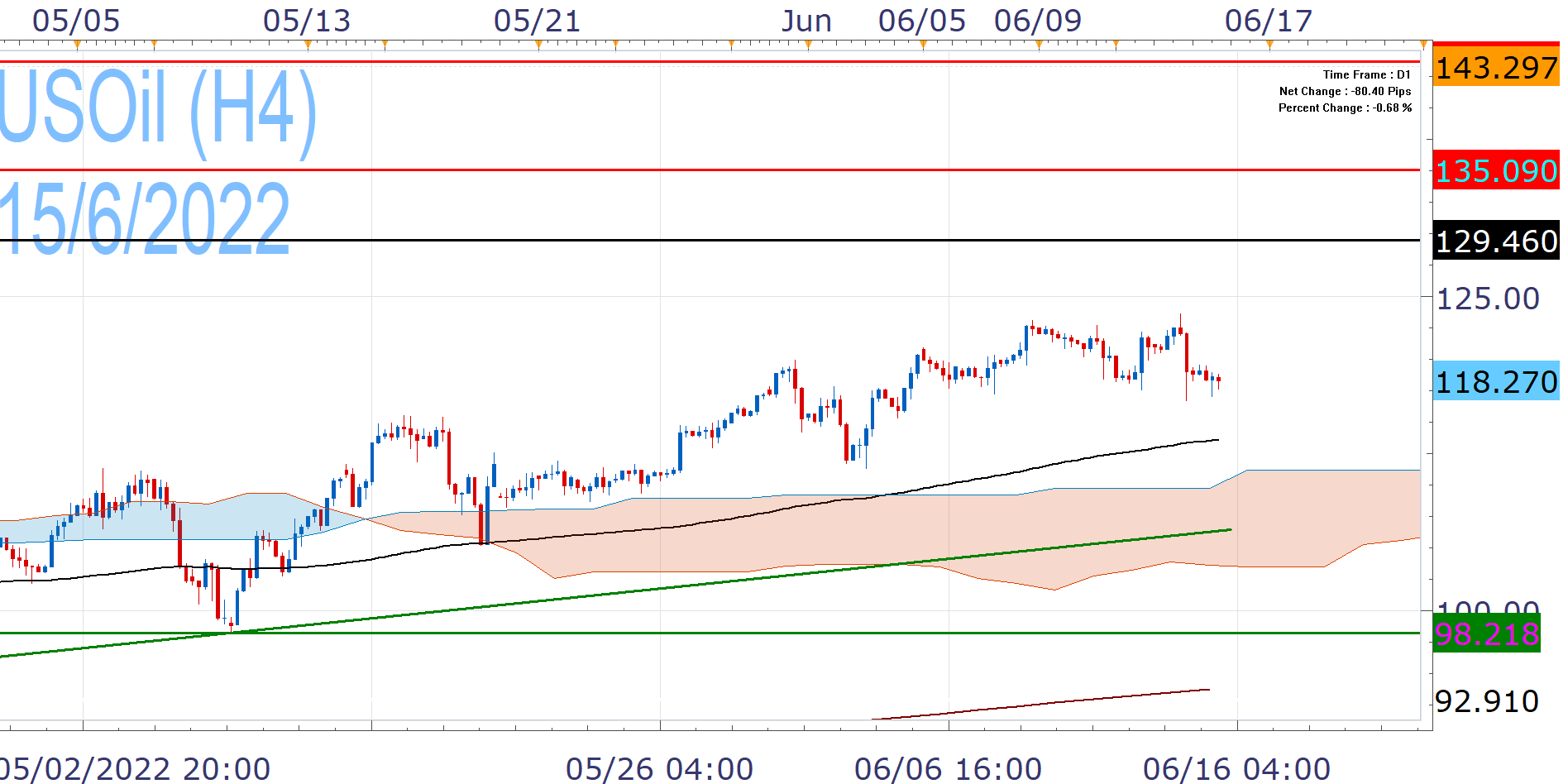